Old Orchard Beach is a great place to spend the day or evening, but I would strongly suggest for accommodations purposes you stay 25 minutes away in Portland, as we did at the Embassy Suites (www.portland.embassysuites.com).

It’s almost impossible not to have fun at Old Orchard Beach. The low surf makes this a favorite spot for swimming, sunbathing, and making new friends. When the kids get hungry they can explore the boardwalk for pizza, french fries, hot dogs, cheeseburgers and even poutine, or you can choose from the many family style restaurants around town. Try your luck on the video games, jump on a ride, treat yourself to an ice cream or a cold soda. Thrills, chills and frills-take your pick or do it all.

Catering to tourists and families is a way of life in Old Orchard Beach. The beach, the arcades and amusement rides, nightly entertainment, auto races and harness racing are favorite activities in the Old Orchard Beach area. Old Orchard’s Pier is the center of the recreational activities. Extending nearly 500 feet over the Atlantic Ocean, it features shops, fast food, and games of skill. During the summer many special events are planned to entertain and mesmerize everyone in the family festivals, fairs, free concerts, street dances, and fireworks most Thursday nights. Besides the Pier, the beachfront businesses offer gift and souvenir shops, restaurants, nightclubs, and arcades.

Old Orchard Beach is easy to reach by the major highways in Maine. Exits 36 and 42 off the Maine Turnpike (I-95) take you quickly into our popular seaside resort, as does the access from U.S. Route 1.
South along Route 9 lies the quiet seaside area of Ocean Park, a historic cottage community noted for its religious, educational, and cultural programs. The Ocean Park Association sponsors numerous lectures, concerts and other events. At the southern end of Saco Bay lies Camp Ellis. Here the mouth of the Saco River meets the sea, and memorable sailboat, whale watching expeditions, or deep-sea fishing trips await. You will also find several interesting shops, a couple of restaurants, and a long breakwater to walk.

The cities of Biddeford, Saco and Scarborough are immediate neighbors, offering a variety of services and shopping. The Southern Maine Medical Center in Biddeford provides quality medical care for the region. In nearby Prout’s Neck is the Winslow Homer studio where the artist worked at the turn of the century. New England’s largest salt marsh is off Route 9 in neighbouring Scarborough with guided walks and canoe tours. 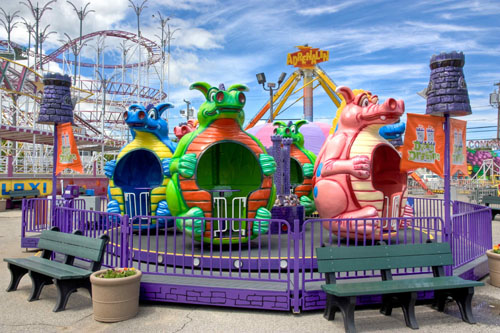 WHAT TO DO: While Old Orchard’s seven-mile long stretch of wide sandy beach is understandably the major attraction, there is a full range of other things available to see and do in and around the area. Palace Playland (www.palaceplayland.com) is New England’s only beachfront amusement park. It features a giant arcade, beautiful carousel, a kiddieland, a new ferris wheel and the galaxi coaster. It is open Memorial Day to Labor Day and features fireworks every Thursday night by the Pier. What’s great about this place is that you do not have to pay for admission, just for the rides. This can be done by buying tickets or a wrist band for unlimited access. There is no particular entrance or exit, so you can take a break anytime you want and explore the Old Orchard beach strip of shops and restaurants or take a walk on the Pier.
The park is owned by businessman Joel Golder. His son Paul serves as executive vice-president and his brother Fred handles business affairs.
Paul’s wife Silvia works with him at the park. So do his mom Harriet, sister Stacey and Fred’s wife Caron. His Aunt Carole operates two food stands as a tenant in the park. Her son, Adam, works with her, with his wife Thea.

Every effort is made to accommodate special needs patrons. The park itself is easy to navigate in a wheelchair. Individuals with a physical handicap will be given special access to rides when possible. 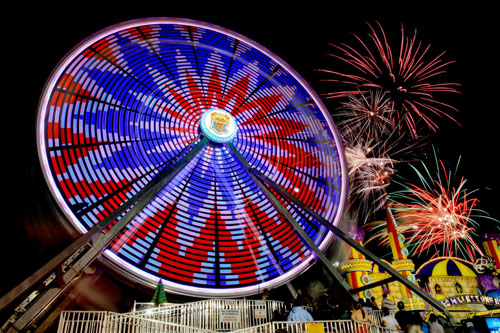 In 2012 the park added two brand new rides, Riptide and an upgraded kiddie Frog Hopper. Another new addition for the kids is called Dizzy Dragon. It was previously operated at an indoor entertainment center. The new ferris wheel offers a spectacula light show. I was happy to reconnect with Paul, who is very hands on where this park is concerned. We met during my last trip in 2009 and have since corresponded via Facebook. Let me tell you that Palace Playland is a real “upper” on a nice evening and fun for all ages. My favourite experience of the night was Cascade Falls, in which you are pulled up to two steep hills and then dropped down through a stream of water. Be prepared to get soaked. On a warm night, it is an amazing way to get cooled off. There is plenty of parking on adjacent streets for about $5. Take some time to walk the touristy streets where you can buy souvenirs ,beach girl and sample a lot of fun food.
Palace Playland is the perfect place to spend the evening with family and friends. In the summer you are sure to hear a lot of French being spoken as Quebecers travel to this particular part of Maine in drov es. 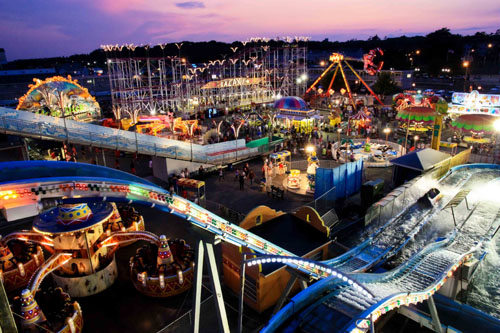 HISTORY: The earliest records of the Old Orchard Beach area date back to 1653. The first settler, Thomas Rogers, established “Garden by the Sea “in 1657. A few years later ten militiamen repelled 150 attacking Indians near the beach, but a relief party of townspeople coming to support the malitiamen were killed in an ambush, and Roger’s home was burned. The “old” apple orchard, from which the town took its name, a landmark to sailors for many years, was on high land above the long sand beach. In 1820 Maine, formally part of Massachusetts, became a State by act of Congress. In that same year the first Publick House (inn) was opened serving coach travelers and other transients year round. In 1837, E.C. Staples was coaxed into taking summer boarders at his farm for $1.50 per week. Convinced of Old Orchard Beach’s potential as a summer resort, Staples built the first Old Orchard Boarding House near the top of today’s Old Orchard Street. 1842 brought the first steam railroad from Boston to Portland with a station just 2 miles west of town. The first restaurant to sell seafood treats and “shore dinners” opened in 1851 near Staples Street. The Grand Trunk Railroad opened in 1853 connecting Montreal to Old Orchard Beach, enabling Canadian visitors to flock to this closest beach to Montreal and avoid the long carriage trip.The Civil War began in 1861 followed by years of growth and building of homes, streets, stores, livery stables, and beachfront hotels. 1873 brought the Boston & Maine Railroad passing right through Old Orchard Beach and stopping on the site of today’s Chamber of Commerce. In that same year a group of Methodists formed the Old Orchard Campground Association. The Ocean Park Association built “The Temple” in 1881, and nationally known speakers were heard every Sunday all summer.
In 1892 electric trolley cars replaced horse cars to Biddeford and Saco. 1898 proved to be an unfortuitous year to complete the first Pier. Built of steel and measuring 1,770 feet long and 20 feet above the tides, their Pier was severely damaged in November of that same year. 1900 brought the first town hall and 1902 the first amusement area complete with roller skating, merry-go-round, rides, games, and refreshment stands. The Portland to Old Orchard Beach Electric Railway opened in 1903 where 14 miles of track were traveled in under one hour for $20.00. The great fire of 1907 destroyed the entire beachfront as firemen from Portland, Biddeford, and Saco rushed to the beach but struggled to contain the blaze, hampered by low water pressure. Rebuilding began at once, and one project “the standpipe” assured adequate water for all. March 1909 brought another damaging storm destroying “White City” at the end of the Pier and reducing the Pier to 700 feet. An international auto race was held on the beach in 1910 with Dave Lewis winning the 100 mile race. The 1920′s and 30′s were the Big Band era. All the famous dance bands, Guy Lombardo, Rudy Valle, Duke Ellington, and more visited the Pier Casino each summer, and thousands danced over the waves under the revolving crystal ball. 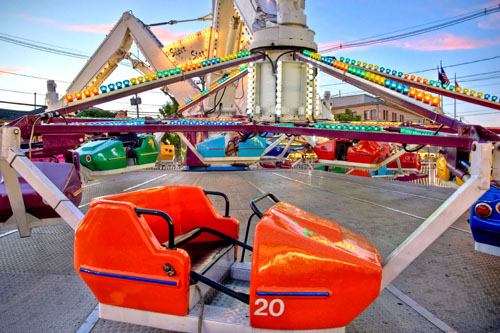 Sparked by Lindbergh’s daring flight, many Trans-Atlantic flights took advantage of Old Orchard Beach’s long stretch of wide hard packed sand to attempt their own crossings. The storm of February 1978 almost demolished the Pier, and a new pier was immediately planned. Today’s Pier opened in June 1980.