Well this was a new stop for our family. While we originally looked at staying in Portsmouth, New Hampshire, getting a booking there was no easy task. Most of the rooms were already spoken for by government personnel attached to the Naval Shipyard and these individuals tend to stay there for extended periods of time. Always a fan of the Homewood Suites chain, I found one in the suburb of Dover (www.dovernh.homewoodsuites.com). This is part of the Lafrance Hospitality Group (www.lafrancehospitality.com), which also owns a Comfort Inn and Suites and a Hampton Inn nearby.

Dover is about 15 minutes from Portsmouth and 25 from beautiful Rye Beach. You are also only a 30 minute drive from the Maine beaches.

As Michael Bolduc, head of the Greater Dover Chamber of Commerce notes, the city has a well earned reputation for thriving businesses, an expanding arts and cultural scene, a wide selection of dining establishments, a notable history, a strong sense of community and beautiful scenery. The city’s waterfront district is currently undergoing an intense beautification and revitalization effort that will only add to the quality of life. Residents and visitors alike enjoy the city’s parks, trails, and outdoor activities. For example, the self-guided historic walking tours lead to the renowned Woodman Institute Museum and other historically relevant locations that underscore the significance of New Hampshire’s first permanent settlement.

This New Hampshire Main Street community offers exceptional shopping and dining opportunities—and with no sales tax in this state, shopping dollars go so much farther. Dover’s tree-lined downtown is brimming with quaint shops, boutiques, and restaurants of all types. Dover’s cultural scene is strengthened by fine art and craft galleries, arts collective at One Washington Center, a variety of music venues (including the Rotary Arts Pavilion in Henry Law Park) and the Garrison Players theater group. Dover is also home to the Children’s Museum of New Hampshire and the Woodman Institute Museum.

The Greater Dover Chamber of Commerce presents a number of community events throughout the year, including the award- winning Cochecho Arts Festival. This free, outdoor, summer-long family concert series features an array of acclaimed entertainers and comprises the Tuesday Liberty Mutual Children’s Series, the Thursday Luncheon Concert Series, and the Friday Evening Concert Series. Apple Harvest Day, held on the first Saturday in October, draws more than 35,000 people to downtown Dover to enjoy more than 120 hand crafters, children’s activities and games, food, and more.
Dover is easily accessible from all directions. Take the I- 95 to Route 16 and use Exits 6 through 9 (8E is recommended for access to downtown). For more information visit www.dovernh.org.

WHERE TO STAY: I have always enjoyed my stays at The Homewood Suites. In Dover this was no different. Located in the heart of the business district, at 21 Members Way, this hotel is just minutes from downtown Dover and many fine restaurants and shops. It is the perfect place for short and extended stay accommodations. We were there for five days and it proved to be a great base for our activities. Their sister properties, the Comfort Inn and Suites and the Hampton Inn, also have solid reputations. General Manager Scott Goldberg has a decade of experience in the industry and he is only 29. 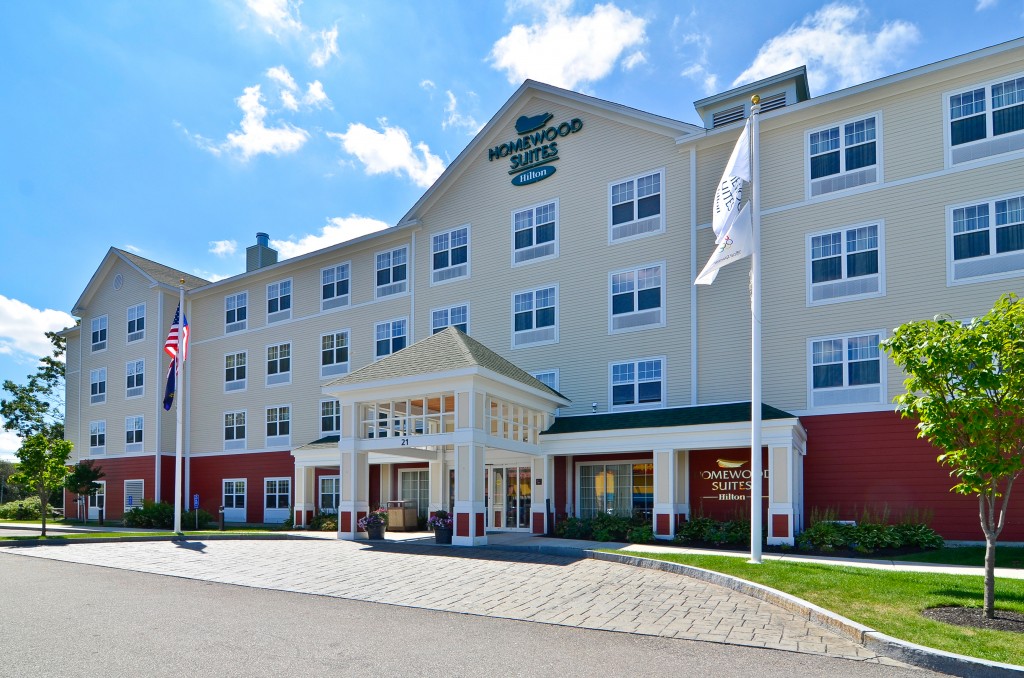 This Homewood Suites Dover only opened in 2008 and still looks spanking new. It offers all of this on a complimentary basis: a daily Suite Star hot breakfast buffet; dinner and beverages Monday through Thursday evenings at a Welcome Home Reception; parking; high-speed internet access; shuttle service providing transportation to the surrounding area, including downtown Portsmouth; a business center, with print, photocopy, and fax capabilities; Neutrogena bath products; a fitness center, indoor heated pool, whirlpool and outdoor patio. There is also a 24-hour Suite Shop convenience store. 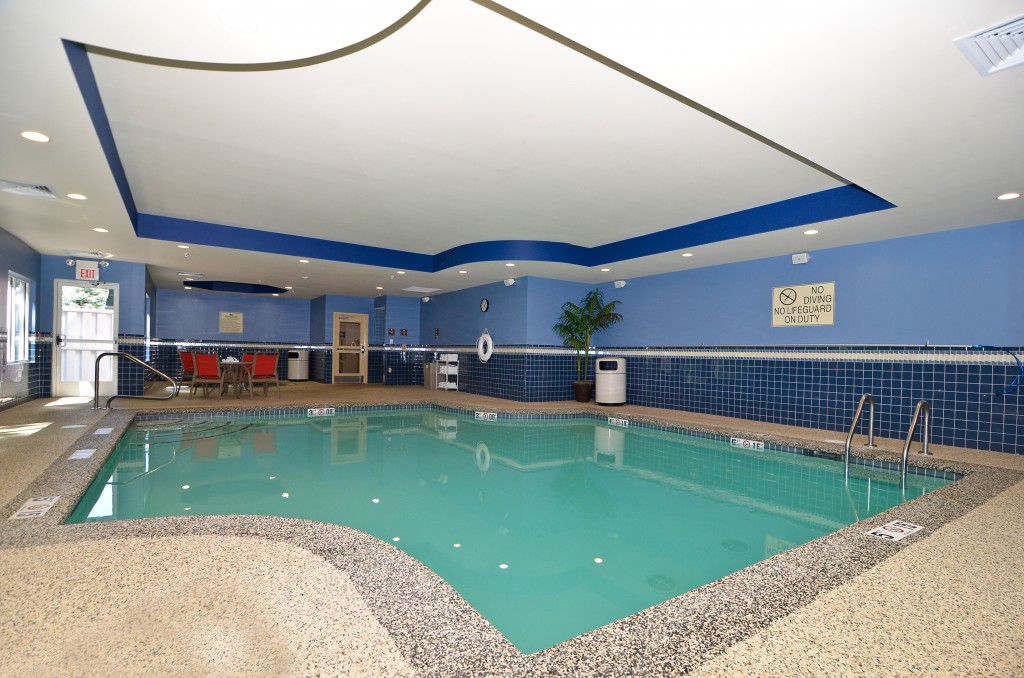 With its spacious suites, fully equipped kitchens, and separate living and sleeping areas, this hotel is perfect for families who need some space and naturally a good choice for the corporate field and travellers looking to remain productive while on the road.

We really appreciated the fully equipped kitchen in our one bedroom suite, complete with full-size refrigerator, microwave oven, two-burner stove top, and coffee maker. There were two televisions with a video player, two telephones with data ports, an iron, ironing board and hair dryer. Pets are allowed here (maximum 50 pounds) for a fee of $50 a night. The third floor of the hotel is reserved for this. Just up the street are a number of restaurants, grocery stores, a Target, Walmart, TJ Maxx and more. 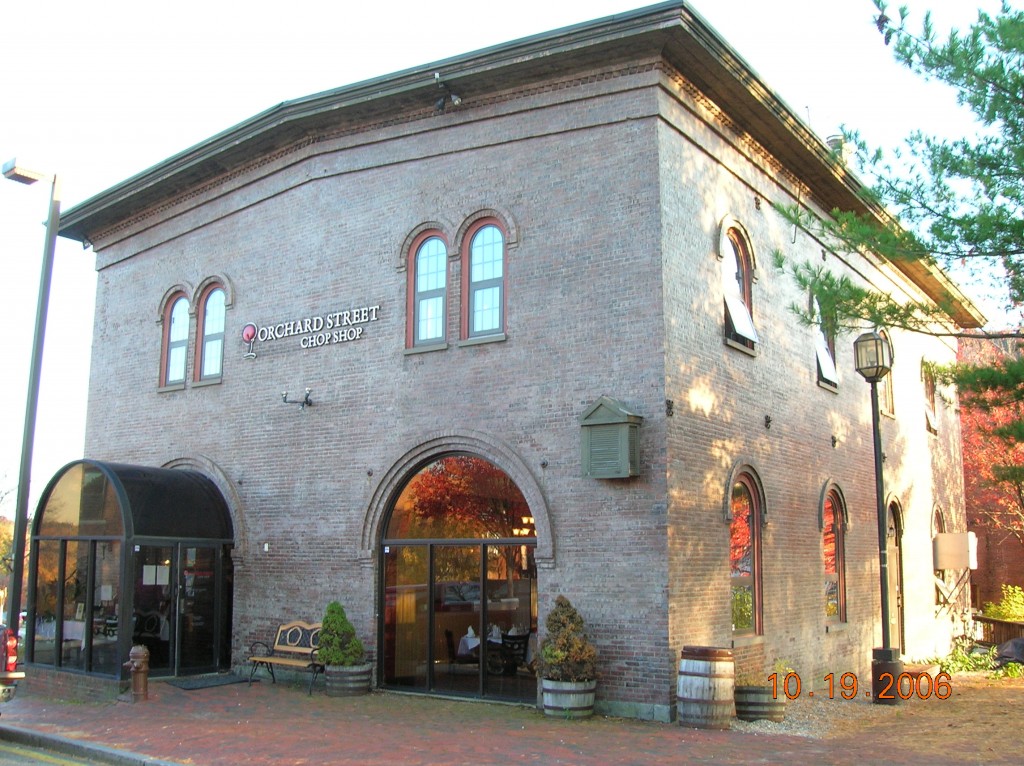 WHERE TO DINE: The Orchard Street Chop Shop (www.orchardstreetchopshop.com) gets my vote for the top dining option in Dover. The magnificent dining room is one of the most elegant on the seacoast. It seats 78 people at the main level, 100 upstairs and 32 on the seasonal patio. The restaurant features floor-to-ceiling stone fireplace, oversized booths, Brazilian Cherry wood floors, bronze chandeliers, and wines scattered around the open-grill dining room. This room can be separated for private dining rooms or the entire room can be booked for any special occasion.

Open Monday through Saturdays at 5 p.m. for dinner, The Orchard Street Chop Shop is housed in the original Dover Firehouse. Built in 1865 for the horse-drawn fire trucks, it is one of the oldest historic landmarks in the city. It was used as the firehouse up until the 1970’s when it was converted to the Firehouse I restaurant. It has been a dining establishment ever since. 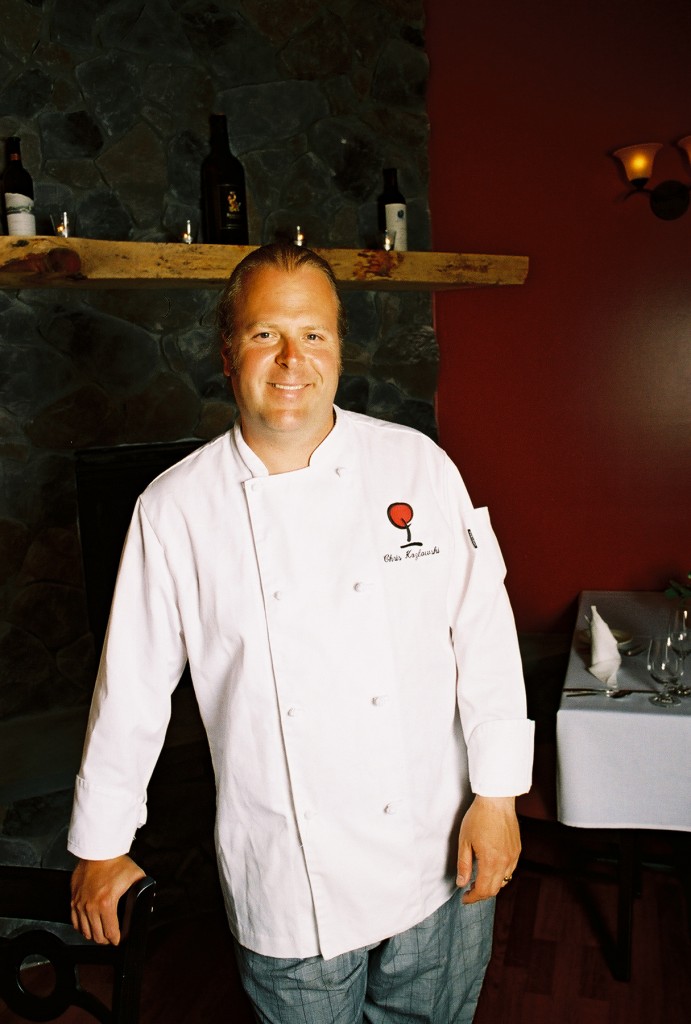 On Easter Sunday 2003, a fire gutted the kitchen and did extensive smoke damage to both the first and second floor. The Firehouse I closed its doors for good. In January 2004, Chris Kozlowski, better known as “Koz” and owner of the famous Crescent City Bistro and Rum Bar, had the opportunity to purchase the building and began rebuilding the interior. After four short months and close to $1 million later, Koz opened up the new Orchard Street Chop Shop, a prime steakhouse. The Chop Shop is touted among the top steakhouses in northern New England, specializing in dry-aged USDA Prime steaks and an extensive all-American wine list with many older vintages.

“We get people from all over New Hampshire, Maine and northern New England,” says Koz. “The furthest reservation we have ever gotten was from Iraq. They were coming back from being stationed there and decided to call for a reservation because she wanted a big steak. That was pretty neat.”

Koz got his start as a prep cook at a small camp in Wolfeboro, NH in 1989. A few years later he then went to work in the kitchen for Hart’s Turkey Farm in Meredith, NH, a local favorite. Working there for a few summers while attending college, Koz moved up the ranks and became a kitchen supervisor by the early 1990’s. While attending college at Colby-Sawyer College, Koz studied business management with a concentration in hospitality. He soon became class president both his junior and senior years. During the summer of 1994, Koz moved down to St. Croix, U.S.V.I. and completed his internship for the Chart House restaurant corporation as one of the managers there.

During his senior year at college, Koz was accepted at the prestigious Culinary Institute of America in Hyde Park, NY where he started in 1996. At the CIA, Koz developed a liking for home brewing and founded the CIA Home brewers Club. Soon after, Koz got heavily involved in extracurricular activities and was elected president of the Ale & Lager Educational Society, one of the most popular clubs at the CIA. Finally, he joined the Student Council during the final year there and was voted President, the most celebrated position a student could have at the school. Koz graduated in early 1998 with the Student Council’s “Distinguished Service” award.

After graduating, Koz was offered a position brewing beer at Federal Jack’s in Kennebunkport, ME, Shipyard Brewing Company’s pilot brewery. After working there for a few months, Koz moved up the ranks and became head brewer before leaving there in the winter of 1998. He then went back to work as sous chef for the William Tell Restaurant in Campton, NH under the highly acclaimed Swiss-chef, Franz Dubach. This is where Koz completed his CIA externship as well. Chef Dubach is one of Koz’s greatest culinary influences to this day.

During the summer of 1999, Koz packed his bags and moved out to Calistoga, CA to learn how to make wine at Vigil Vineyards, a small boutique zinfandel producer in northern Napa Valley. This is where Koz picked up many contacts in the wine world and rounded out his education on the beverage side of the hospitality industry.

In the winter of ’99, Koz moved back to New Hampshire and took over at the helm of the kitchen at the Governor’s Inn in Rochester. He became the youngest executive chef in the State and brought the restaurant up to a four-star establishment. After garnering many accolades at the Inn, it was time for Koz to move on and open up his own place. In September 2001, Crescent City Bistro and Rum Bar opened its doors to a very enthusiastic following. After being open for only nine short months, the restaurant had to expand to more than double its size to accommodate the following he had built.
After a few successful years, the opportunity arose to buy the Firehouse I restaurant in January 2004 after being gutted by a fire the previous year. After a number of months completely refurnishing the inside with a brand new state-of-the-art kitchen, cigar lounge, glassed-in wine room, and two new dining rooms, the Orchard Street Chop Shop opened its doors in April, 2004.
Koz has been credited with starting the new culinary renaissance in Dover and restaurateurs from all over the country are now following in his footsteps.

The Chop Shop Orchard offers the finest selections of meats and seafood, skillfully prepared with a stunning assortment of traditional steakhouse sides and sumptuous desserts – all house made. We started off our dinner with some salads (wild field green and Tuscan caprese). Two members of our party chose the eight ounce petit filet mignon while I opted for the 14 ounce Delmonico steak. Each main item comes with your choice of two sides. The smashed potatoes won us over.

WHAT TO DO: The Children’s Museum of New Hampshire (www.childrens-museum.org),The Woodman Institute Museum ( www.woodmaninstitutemuseum.org), the Jenny Thompson Swimming Pool (http://www.ci.dover.nh.us/rec_jtpool.htm) represent popular stops for visitors. There are also walking tours and jaunts on trails and at parks to consider. Check out dovernh.org/things-to-do for more details.