Q: Can you tell me about Plattsburgh, New York?

A : Plattsburgh is a small Amercian city located on the western shore of Lake Champlain in the northeastern part of the state of New York. It is only 60 miles from Montreal.

Plattsburgh was founded by Zephaniah Platt in 1785 after he was granted the land for it by George Clinton. The city government was established in the former Village of Plattsburgh in 1902. With its significant location on a major water thoroughfare and close to the US-Canadian border, Plattsburgh has been the site of a number of historic events including the Revolutionary War’s Battle of Valcour and the War of 1812’s Battle of Plattsburgh. In more recent times, the city has been distinguished primarily by its United States Air Force base and the State University of New York (SUNY) at Plattsburgh, although it is also a node for tourists headed to the Adirondack Mountains. The city beaches and camp grounds are packed all summer long. It is also a spectacular place for boating, wind surfing, or fishing. There are some fun dining spots as well.

Plattsburgh has great shopping, including the large Champlain Centre North with anchor store JC Penny. There are a lot of Montreal Jews who have country homes here. Many Jewish students attend SUNY. I know many Torontonians visiting Montreal who wakeup with a desire for a change of pace from trips to Niagara Falls and Buffalo and check out this type of New York experience. The Olympic village of Lake Placid is less than an hour’s drive offering you world-class recreation and relaxation year round.

On June 19, 2007 the Plattsburgh International Airport (PBG) opened its doors for passenger service. The tiny facility remains very much a work in progress. But it is easy to get to and offers free parking for however long you are away. It is already touting itself as “Montreal’s U.S. Airport.” Delta and Allegiant Airlines presently fly out of there. Allegiant, a Las Vegas based carrier, is presently offering well priced direct flights to Fort Lauderdale and Orlando.

ACCOMODATIONS: Given the backups at customs these days due to the strong Canadian dollar, I would strongly recommend you head to Plattsburgh the day before your flight. We did just that, staying at the Comfort Inn and Suites (plattsburghcomfortinn.com) at 411 Route 3. It worked out exceptionally well. There was no need to wake up especially early. Waiting for us was a generous hot and cold breakfast absolutely free. If you sleep in, a new Perkin’s Restaurant is attached and it serves breakfast 24 hours a day. There is also a Boulangerie Café, a lobby coffee shop featuring Starbucks™ Coffee and fresh baked pastries. And Legends Sports Bar is the place to catch the latest game on the tube. 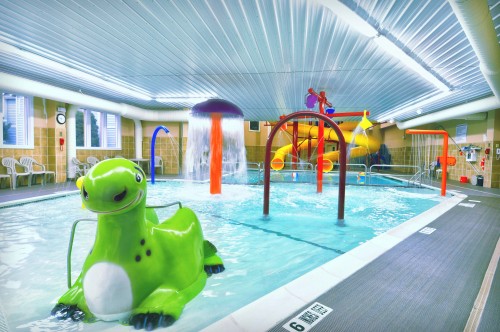 You might want to find time to check out the hotel’s health club and fitness center, entertainment room, indoor heated pool complete with a waterslide. It was so nice, we wanted to stay longer. Of their 114 rooms, 28 are suites. They come complete with fridges, microwaves and a kitchenette sink. A gigantic Wal-Mart Super Store is literally in the parking lot while the Champlain Mall and Price Chopper supermarket are a short walk away.

Owner Jim Murray and his partner Terry Meron opened the locale in 1988. Murray was a teacher by profession. Meron owned an Italian restaurant. He wanted to get into the hotel business and asked Murray to come aboard. Before you could say “reservation” they had a Comfort Inn franchise, which they have expanded substantially over the years. It has a games room, party room and banquet facilities. They secured the Perkin’s franchise in 2006 to give customers another reason not to have to leave the facility. Canadian clients come to Plattsburgh for the great merchandising deals. One guest bought four winter tires for his car. “They cost him $240,” said Murray, “compared to $700 in Canada.” 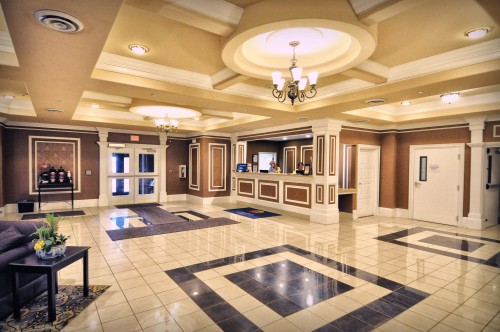 Rooms range in price from $69 to $99 per night. And if you forgot to bring along any necessities, the front desk has a magic drawer complete with toothbrushes, toothpaste, shaving cream and razors.

One thought to “Plattsburgh: New York”