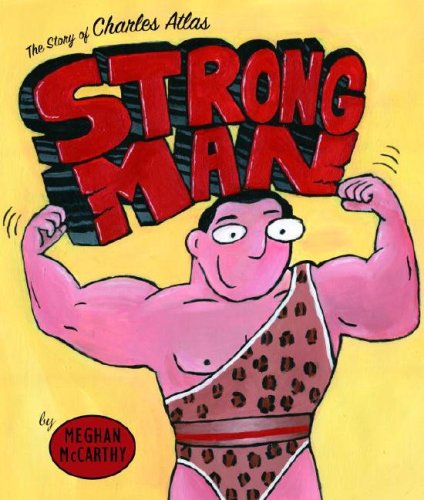 In days of old, muscles were built with exercise and diet and after watching that skinny guy get sand whipped on his face from those famous Charles Atlas comic book ads.  Every kid wanted to follow the Charles Atlas regiment and get big muscles and the girl on the beach.  The basic primordial of existence for any geeky teenage boy, get the girl and beat the bully.  Now you can get faster results with drugs and a maxed  out credit card unlike Charles who promised you bulging biceps at a fraction of the cost.  This book examines the life and the myth of one of comic book’s greatest ads forever imitated in pop culture.  Perhaps the catalyst of today’s craze to build a better chiseled human being.

He could tear phone books in half, bend iron bars into giant Us, and pull a 145,000-pound train with his bare hands. But Charles Atlas wasn’t always one of America’s most famous strong men. Once upon a time, he was a "97-pound weakling" who was picked on by neighborhood bullies. Using her trademark humor, Meghan McCarthy brings to life the story of Charles Atlas, the man who would become "the World’s Most Perfectly Developed Man" and, with his fitness campaign, inspired the entire nation to get in shape, eat right, and take charge of our lives.