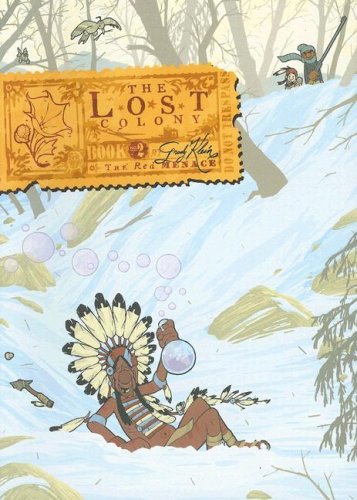 It’s amazing how many graphic novels that have sprung just in the past year alone, there is no topic that cannot be handled and translated into good quality illustrated lore. As long as you have good writing and decent art, the sky is the limit. Grady Klein serves us a great tale in his pleasure trip back to the 19th century. With rich and original art, The First Second imprint has once again given us another winner here with this great little series.

In The Red Menace, the much-awaited second installment of The Lost Colony series, the beloved and not-so-beloved islanders confront war profiteering, the Native American Wars, and other unwelcome visitors to their hidden realm.
Grady Klein cooks up a fresh serving of shocks and delights in this one-of-a-kind take on American history. Along with magic potions, stage tricks, and farting contests, be prepared for tragedy, controversy, and even shameful secrets. And of course, plenty of reasonably priced merchandise.
It’s wintertime on the island, and The Lost Colony explodes with intrigue in a chilly palette of pastel shades, splashed with patriotic red, white, and blue. In this continuing feast for your eyes and mind, human nature plays out in all its grim hypocrisy and hilarious contradiction—and just like most things on the island, The Red Menace itself isn’t what it seems.