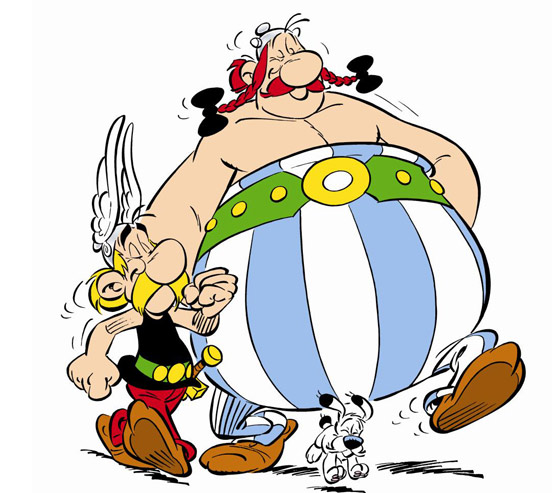 Asterix is turning 50 this year, he was created on October 29, 1959 for the weekly Pilote magazine. They are releasing the 34th book edition of the series. Asterix’s creators, the late writer Rene Goscinny and illustrator Albert Uderzo are national heroes back in France where there is a dispute of exactly where the adventures took place in the books. The precise location of the Gaul adventurer’s village was never disclosed in the book but from the classic first page with the magnifying glass looking over France many conclude that the location is in Erquy, on the Breton peninsula’s rocky northern coast. Bragging rights for Erquy are vital for the 50th celebration of the character, as local areas are claiming their towns to be the true location of the village. Asterix is like Superman in France and a national hero as Tintin is to Belgium. The magic potion guzzling Asterix in his moment of Popeye strength still fights the Romans after all these years and has legions of fans. There were three live action films based on the character and the franchise is not holding back. Asterix books have been translated into 107 languages and sold 325 million copies worldwide.

In commemoration of Asterix’s 50th birthday, born on 29 October 1959 in the pages of the very first issue of the weekly magazine “Pilote”, Albert Uderzo has come up with an exceptional gift to pay homage to his heroes and to the millions of their readers throughout the world!

The date has been set for all fans: on 22 October 2009 the whole world will be able to discover an entirely new album of Asterix short stories, with 56 pages of brand new comic strips as well as a previously unpublished text from René Goscinny, illustrated by Albert Uderzo!