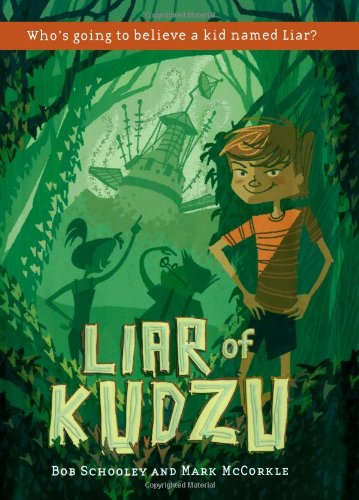 Bob Schooley and Mark McCorkle (creators of the hit animated series Kim Possible) have a new book right now that deserves a look at. The book is a sort of romantic Southern-gothic-science fiction-teen-comedy and Disney just picked it up for future production for the "Disney Channel Original Movie".  Chris Turnham is the cover artist of the book.

"Everybody calls me Liar. They don’t mean no harm by it, it’s just a plain fact that I am the finest truth bender in all of Dixon County. And not little weeny white lies. Big fat whopper ones that make people forget the question they asked in the first place."

When a new girl, Justine, moves to town, Pete Larson — better known as Liar — is smitten. He gets his chance to impress her after a strange spacecraft crashes in the woods. Along with the class science geek, Bobby Ray Dobbs, they discover that the crashed UFO holds an amazing key to the future. But who’s going to believe a kid named Liar?