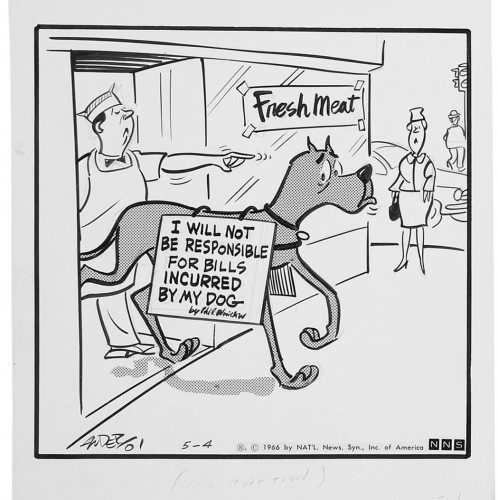 Happy 88th birthday to Brad Anderson!  Brad Anderson?  He is better known for his creation Marmaduke.  His canine creation has been around since 1954.  Brad Anderson’s success pales in comparison to the likes of Charles M. Schulz and Hank Ketcham.  You either like Marmaduke or hate him.  The one panel strip has been criticized by many newspaper comic strip readers for being one of the worst strips ever.  The old school strip has stayed true to the original formulated humor.  Brad Anderson is still involved with the strip.  With less newspapers around, the strip is less prevalent as it was before but still has an audience.

In his satirical analysis at The Comic Strip Doctor, David Malki of Wondermark ranked Marmaduke among “the worst newspaper comic strips” alongside Heathcliff, Family Circus and Dennis the Menace.