Save the Deli: In Search of Perfect Pastrami, Crusty Rye, and the Heart of Jewish Delicatessen

In the early 20th Century gastronomy defined the communities clustered together in the major cosmopolitans such as Chicago,Cleveland, New York, and Montreal defined the Jewish immigrant plight from the old country. They brought recipes that came from the old country as did other Europeans that germinated the sprawl of city growth. The birth of the deli might be attributed to the first German settlers of New York, but the German Jew added ambiance with kosher-style foods that have become the norm of today. The early stages of the deli were of a well knit group of people of religion and survival within a strange world other than the Jewish religion. Time and assimilation has eroded the old traditions, delis are not as seclusive when they began. Ethnicity change has further contributed to the city landscapes where delis sprouted from. The changing times and less religious appetites has driven many away from traditional delis. Most proprietors are no longer of Jewish decent but new business men who have taken over the deli future. 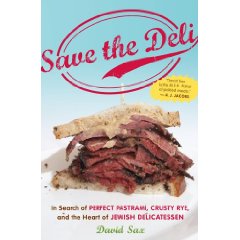 30 year old David Sax laments the demise of the old delis that seem to be fading ever so slowly from the roots that he grew up with. Save the Deli is a testament and the history of a people where food plays a significant role in shaping a society with pastrami and rye bread. As pizza and spaghetti defines the Italian heritage and identity. The deli is more than food, it’s about a people that gathered together at one time dined and talked about their futures and some became great contributors in today’s present landscape of evolution of North America. This part of the deli will be lost as many are closing in some cities and are losing their identities and are mere fast food joints. The deli is an experience. That is slowly being eroded as pastrami can now be found practically in other milieus besides the deli. David’s book is less about food but more about a history and travel of people and way of life sprawled throughout North America and protecting the heritage of a society that toiled for the future generations. Save the Deli is an oral history transcribed in book form of way of life depleted by progress as many groups have experienced in the past. Save the Deli is true food for thought.

Man on a mission to save the Jewish deli

Save the Deli Official Site