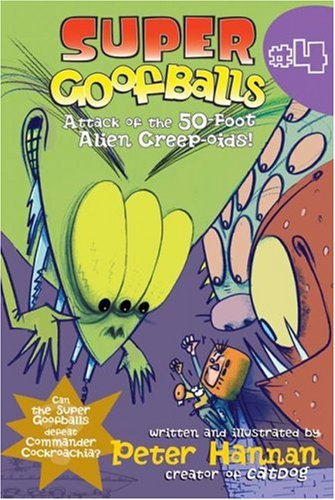 Super Goofballs, Book 4: Attack of the 50-Foot Alien Creep-oids!
Peter Hannan the creator of a little cartoon in the contradiction of yin and yang in the animal kingdom with the creation of Catdog. The show was created in 1998 and lasted till 2002. What is a talented cartoonist to do with a follow-up. Rest on his laurels he did not. He created a fun chapter book series for kids called Super Goofballs. With characters such as Amazing Techno Dude and Granny (the Bodacious Backwards Woman) how cannot you have success with an amazing winning formula. The kids agree and that is why Peter is already up to volume four and counting. As cliché as the themes and ideas might be, Peter takes a different spin and creates something totally different that will grab your attention. Read more>>

He is six feet one inch tall in his bare feet, eight feet three inches tall in his special shoes, and several miles high in his supershoes. He is shockingly handsome. People have been known to faint when they see him. He is the creator of the animated TV series CatDog, which is based on a true story. His writing, illustrations, and single-panel cartoons have appeared in lots of newspapers, magazines, and books. He lives in sunny California with his perfect wife and kids.