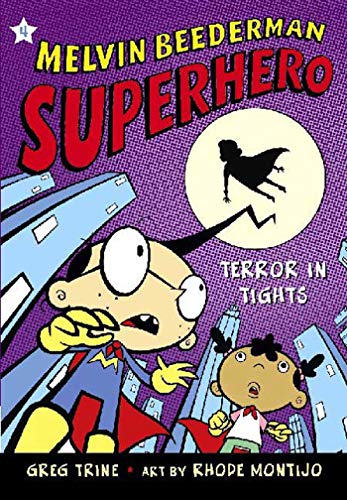 Rhode Montijo is a very busy guy as of late, my kids really enjoyed his last book called Cloud Boy and he is already on his fourth edition of Melvin Beederman, Superhero and is due with another book called The Three Swingin’ Pigs. Rhode Montijo is well known in some comic corners for his earlier work called Pablo’s Inferno. It’s good to see he is well rooted to his comic book origins.

Mysterious threatening e-mails, a sad sidekick, and . . . country music? Melvin Beederman and his partner in uncrime, Candace, are really in trouble. Once again someone is out to get them, and this time not even the Superhero’s Code can save Melvin from a terrible bologna-filled plight. Candace alone can rescue him-if only she can remember the country singer’s motto: "When all else fails, sing about your dog."
Melvin Beederman has launched himself as a flying success with kids and adults alike. And the sky is the limit with this fourth book!