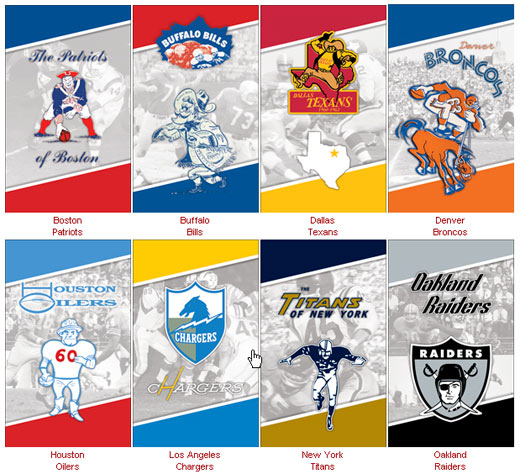 What was old is new again, the AFL is celebrating 50 years since the inception of the AFL league of 8 teams in late days of the summer in 1959. The retro old school jerseys are now proudly displayed in many stadiums throughout the land. The halcyon throwbacks are a time of innocence and hope. The original 8 as they were known was the idea of Dallas businessman Lamar Hunt who invited the following cities Dallas, Denver, Houston, Los Angeles, Minneapolis,New York,Buffalo and Boston. Just as the season began Minneapolis defected to the NFL and Oakland was became a replacement city. Eventually 10 years later all 8 teams would join the NFL as a whole. The proud traditions of the rogue league are celebrated this year with a rich tradition of these original 8 who hold a special place in many fans’ hearts. Some jerseys are cool, others not so much, nostalgia calls the day and it’s fun to see how silly some of these guys look in the old uniforms.