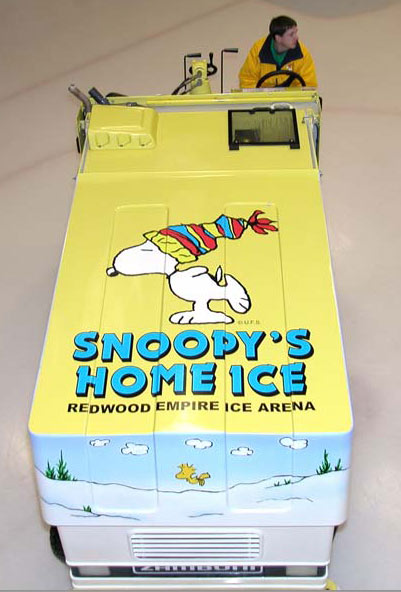 One would think that the Zamboni was created in Canada. Alas that is not the case. Maybe in a cold city in America. Far from that. The Zamboni was created in Paramount, California in the heart of Los Angeles by Frank Joseph Zamboni where snow is nonexistent. The Zamboni has been featured many times in Peanuts. Charles M. Schulz an ardent fan of hockey created Sparky the Seal, the Seal’s mascot a lesser known Schulz creation. Hockey roots in California were planted way before Wayne Gretzky brought hockey to the sunbelt. The Zamboni was ready for hockey way before the teams of the Kings and the Seals laced their blades on Californian soil.

Until 1949, resurfacing an ice rink required a tractor-pulled shaver followed by three or four workers scooping away the shavings and then spraying and squeegeeing water. The process-including the refreezing-took more than an hour. That all changed when a tireless inventor by the name of Frank J. Zamboni, who also happened to own a 20,000-square-foot rink in Southern California, put his mind to creating a quality sheet of ice in a shorter time. The story of the machines he produced—now as beloved as ice skates and hockey pucks among winter sports enthusiasts—is fully told for the first time in this book, a fun-filled history of machine-age ingenuity and entrepreneurial spirit that forever changed the nature of sports on ice.