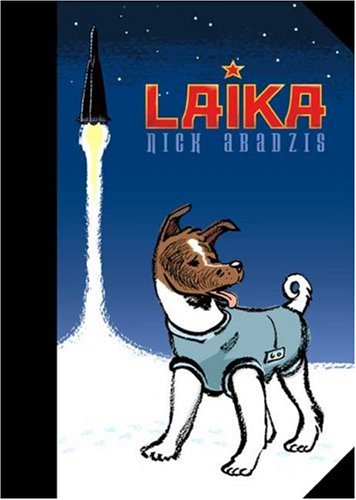 Laika
Who was the first space traveler from earth? Believe it or not, he was a she, a female dog that is. Laika was an abandoned puppy who became the springboard to the space race. Nick Abadzis is a British comics creator who brings us this forgotten event that will celebrate 50 years this September when Laika became the first cosmonaut to orbit the earth. First Second the publishing house once again has a winner on their hands. Blast off into adventure with the canine cosomonaut. In the comic world it should be noted that Snowy was the first dog in space, about 5 years before Laika. Preview>>

Nick Abadzis masterfully blends fact and fiction as he recounts Laika’s journey–from the streets of Moscow to the Soviet space program, and then to her fateful final journey on Sputnik 2. Moving words and powerful pictures relate the history of this momentous event and the political landscape surrounding it, through the life of this small, curly-tailed dog. Poignant and authentic, Laika’s story speaks straight to the heart.