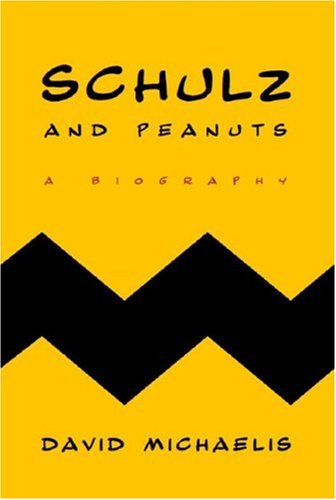 Schulz and Peanuts: A Biography
David Michaelis’s biography, "Schulz and Peanuts," is a bag of mixed nuts. Sooner or later somebody is going to rattle the Schultz legacy. Seen by many as the perfect father and cartoonist who had a grasp on life. But by the end of the day, like you and me he was human. Every cartoonist has his quirks, and good old Charlie had them too. To say he was "melancholy" in nature and he had a gloom complex to him about life, is to say nobody ever read Charlie Brown the comic strip. Seems the Schulz family is a bit offended by this remark and some parts of the book. After reading some excerpts of the book, I don’t see what the commotion is all about. Maybe just a little publicity stunt of sorts to generate a few more sales. Better for all, involved. If there was a boring person to write about it would be Charlie Schulz, and I mean that in the nicest way. His life was as mundane as you can get, get up draw and sleep and repeat till you drop dead on your drawing table, and reap millions while you are it. We benefit as a reading audience, but to be offended by labeling him as melancholy is a bit out there and one family member calling him "the most amazing Christ-like father" is out there too. Read New York Times review.

Mr. Michaelis referred to numerous interviews throughout Charles Schulz’s life in which he talked about his own "melancholy" and anxieties. "I have this awful feeling of impending doom," he said on "60 Minutes" in 1999. "I wake up to a funeral-like atmosphere." Many portraits of Schulz pick up the same theme. Rheta Grimsley Johnson’s 1989 biography, "Good Grief: The Story of Charles M. Schulz," similarly describes him as depressed and plagued by panic attacks, despite a large family and mammoth financial and critical success. Nor does it seem that Mr. Michaelis made a secret of his perspective. He wrote an appreciation of Schulz in Time magazine in December 2000 after his death at 77 in which he clearly laid out the thesis he expands on in his 655-page book, sometimes word for word.