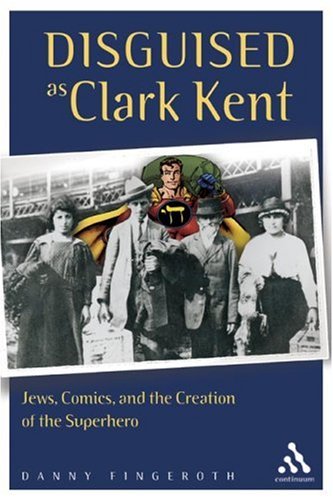 Disguised As Clark Kent: Jews, Comics, And the Creation of the Superhero
Joseph Campbell the mythology professor for many years studied and gave us a well researched life into the doldrums of the myth archetype in the history of humanity. He brought live into these myths. Certain myths resonate in our collective folklore and it represents the growth and future of many cultures. If you were to take the early appearances of Superman and his ilk , you could say they would be the equivalent of either Greek or Norse gods in a 20th century spin. However, after much closer scrutiny, you realize the background of most of the creators were Jewish and they implanted many of their religious believes and spun new myths. Superman is really Moses in a space basket travelling through the cosmos to be found by a new set of parents.
Disguised As Clark Kent: Jews, Comics, And the Creation of the Superhero is an in-depth look into the lives and hardships of the early creators of comics and how they brought religious personalty into their work, either on purpose or not, this was their legacy created for all. When you strip down the myth, you will always find a universality in the message that can be found in any religion, that is why they appeal to many nationalities.