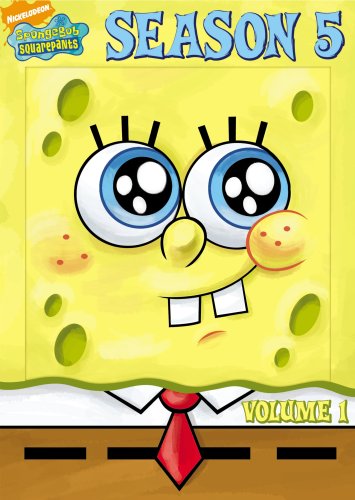 Spongebob Squarepants – Season 5, Vol. 1
I can never get tired of Spongebob, it has that craziness of early comedies such as Laurel and Hardy and the The Three Stooges. The characters are set on their way and never steer from their creative grounds. Put them in any crazy situation and spin the bottle and see where they land and they will always remain the same. Nobody likes tinkering with characters, very little has changed in Spongebob world, five seasons later and all is still the same. That’s the beauty of a show like this, you can arrange them in any order and you will  not notice any difference, unlike the Simpsons where crudeness in the earliest episodes which has it’s own charm are not formalistic as the show is today. It took a bit of patience and luck for the Simpsons to evolve and be the success that it is today. Spongebob found his way very early and has not veered from that direction.

The character-driven toon chronicles the nautical and sometimes nonsensical adventures of SpongeBob, an incurably optimistic and earnest sea sponge, and his undersea friends. Dwelling a few fathoms beneath the tropical isle of Bikini Atoll in the sub-surface city of Bikini Bottom, SpongeBob lives in a two-story pineapple. Instead of taking the logical approach to everyday challenges, SpongeBob approaches life in a wayward and unconventional way. Whether searching for the ultimate spatula to perfect his burger flipping technique at the Krusty Krab, or just hanging out with his best friend Patrick (an amiable starfish), SpongeBob’s good intentions and overzealous approach to life usually create chaos in his underwater world.