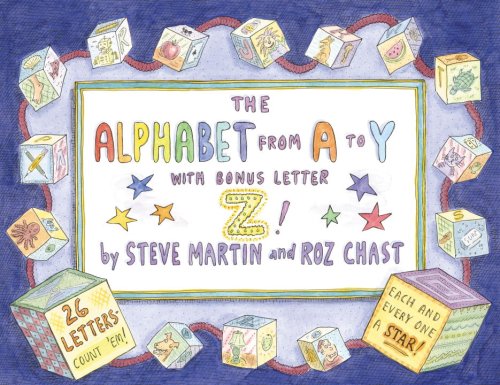 The Alphabet from A to Y With Bonus Letter Z!
Wild and crazy guy Steve Martin like all other actors who think that by putting your name on any book will garnish oodles of money in your bank account is trying his luck in the children’s book market. With the help of New Yorker cartoonist Roz Chast, we are blessed with yet another ABC book. I guess with a full career in the can, why not over populate the kid’s market with an ABC book. Must be a sure sign of an imploding career, no work so let’s write a few scribbles and call that a book. K is for kaching and c is for cynicism and cash too.

The ABCs have never had it so good. Created by two of today’s wittiest, most imaginative minds, The Alphabet from A to Y with Bonus Letter Z! is a sheer delight from A to Z. In twenty-six alliterative couplets, Steve Martin conjures up much more than mere apples and zebras. Instead we meet Horace the hare, whose hairdo hides hunchbacks, and Ollie the owl, who owed Owen an oboe. Roz Chast contributes the perfect visual settings for Martin’s zany two-liners. Her instantly recognizable drawings are packed with humorous touches both broad and subtle.

Each rereading—and there will be many—delivers new delights and discoveries. There, hidden behind Bad Baby Bubbleducks, is a framed picture of a beatnik holding balloons; and the letter C finds clunky Clarissa all clingy and clueless adrift in a landscape cluttered with images ranging from a curiously comfortable clown to Chuck’s Chili stand. A smart, laugh-inducing introduction to the alphabet for young children, The Alphabet from A to Y with Bonus Letter Z! will also enchant adults with its matchless mix of the sophisticated and the silly.