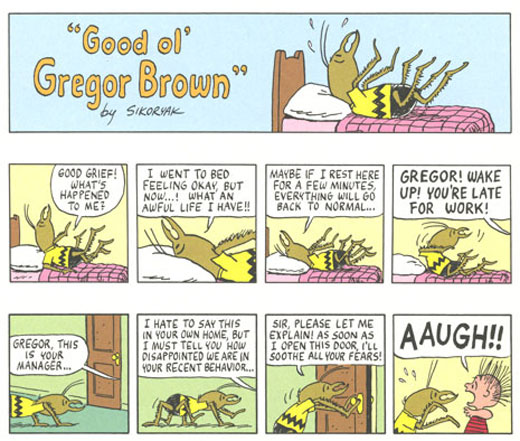 R. Sikoryak has tapped into the classics and gives a nod to the present day popular comic strips. The brilliant cartoonist is collected by Canada’s premier graphic novel publisher, Drawn and Quarterly. Masterpiece Comics is a rich cornucopia reference of literary pop culture cross-over of insanity. Many of these strips have seen light in many other publications, including Drawn and Quarterly. The collected works by Sikoryak is an added bonus to any true connoisseur of comic history. One of my favorite strips in the collection is the Franz Kafta  The Metamorphosis parody of Charlie Brown. You get the sense that Charles M. Schultz impartially based Charlie Brown on Gregor Samsa. 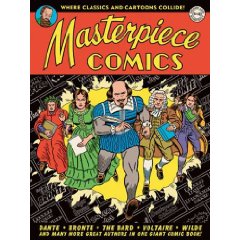 Masterpiece Comics adapts a variety of classic literary works with the most iconic visual idioms of twentieth-century comics. Dense with exclamation marks and lurid colors, R. Sikoryak’s parodies remind us of the sensational excesses of the canon, or, if you prefer, of the economical expressiveness of classic comics from Batman to Garfield. In “Blond Eve,” Dagwood and Blondie are ejected from the Garden of Eden into their archetypal suburban home; Oscar Wilde’s Dorian Gray is reimagined as a foppish Little Nemo; and Camus’s Stranger becomes a brooding, chain-smoking Golden Age Superman. Other source material includes Dante, Shakespeare, Dostoyevsky, bubblegum wrappers, superhero comics, kid cartoons, and more.