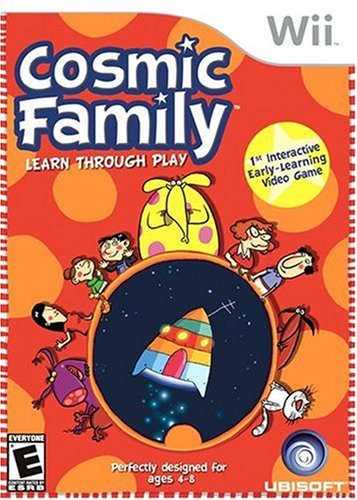 Cosmic Family
For many years since the inception of Pong, parents and teachers have asked for video games that teach while kids have fun. That’s like asking to take the sugar out of the chewing gum. Ubisoft thinks it has solved this question, by creating a very exciting game for the younger set of kids with the release of Cosmic Family. A game that can be fun and be a teaching tool at the same time. Every plan looks good on paper, the kids will be the final judges of the final verdict. The art and concepts are very kid friendly, but there are many savvy young literate gamers who might not go for an offering like this. The equation that makes this possible is the Wii system, it now has a whole new generation turned on to the system. The golden age generation find the system a great way to new found exercise and the kids are finding the same benefits with the system. Many companies such as Ubisoft are jumping on-board this system’s popularity and assimilated their games with this new technology in game playing. Cosmic Family is going the right direction and will hopefully open the flood gates to new games for the younger kids and not just have eye candy games that just are put in any console and never played again because of lack of interest.