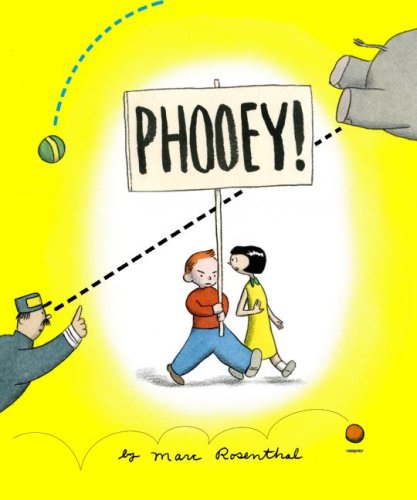 Phooey!
Marc Rosenthal brings us Phooey, a return to classic kids’ illustrated books. This book will leap at you with rich images and sounds. This tale might resinate a bit of And To Think That I Saw It On Mulberry Street and The Cat in the Hat but is more modern and wilder.

When a restless red-headed boy proclaims: "Nothing ever happens around here!" (And who hasn’t heard that complaint at home?), he kicks a can and sets into motion a series of wonderfully hilarious slapstick events that happen behind him—and because of him. With elephants on parade, pirates around every corner, pies flying, and oranges on the loose, Rosenthal creates an adventure-filled world that is anything BUT boring! Kids will love the silly sounds that abound (Skree, Boing, Ploink), making Phooey! a feast for the eyes and ears.