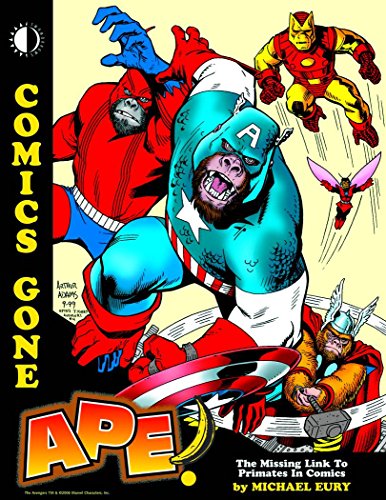 They may be only one notch below humans on the evolutionary ladder, but gorillas and monkeys have for decades climbed to the top of the comic-book world as monsters, super-villains, sentient masterminds, soldiers, aliens, buffoons, and super-heroes. COMICS GONE APE! is the definitive missing link to everything you need to know about these popular primates, including Gorilla Grodd, Beppo the Super-Monkey, BrainiApe, King Kong, Titano the Super-Ape, Cy-Gor, Konga, Magilla Gorilla, Detective Chimp, Blip, Gleek, the Gibbon, Lancelot Link Secret Chimp, Mojo Jojo, Angel and the Ape, and a barrel of others. Comics Gone Ape! is loaded with comics artwork, a chest-thumping gallery of comics covers featuring apes, and behind-the-scenes looks at Planet of the Apes, Arthur Adams’ Monkeyman and O’Brien, and Joe Kubert’s Tarzan. With its all-new Avengers-as-gorillas cover by Arthur Adams, you won’t be able to keep your filthy paws off this book!