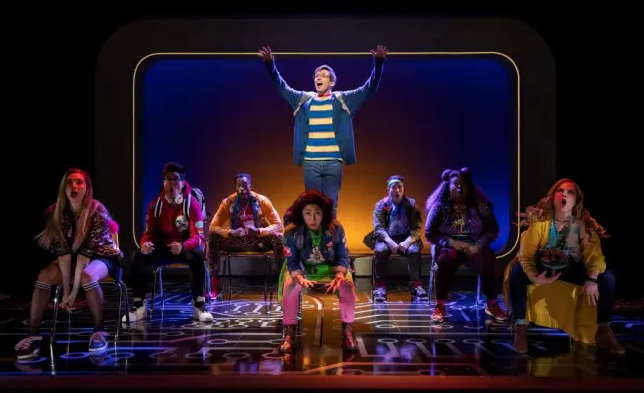 The Broadway hit Be More Chill has been the “little show that could’” since its premiere almost four years ago at New Jersey’s Two River Theater. It ran in 2015 for only one month and its only legacy was a cast album. This was ultimately the spark that ignited a flame, turning the show from a regional theatre production into a viral sensation.

The manner in which Be More Chill gained its popularity, years after its brief regional production, is utterly unprecedented. Prior to even opening on Broadway, the original cast album had been streamed over 250 million times, with the show being the second-most talked about musical on Tumblr, following only Hamilton.

Be More Chill, based on a 2004 novel of the same name by Ned Vizzini, tells the story of high school student Jeremy Heere, a self-proclaimed “loser” whose life is transformed when he spends his bar mitzvah money to buy a Squip, a pill that implants in his brain and teaches him how to be cool. Being popular, Jeremy learns, , comes at a cost, which involves leaving behind his best friend and sacrificing his own moral code.

The show’s fan-favorite moment comes in the form of the song “Michael in the Bathroom,” performed with gusto by actor George Salazar, who fulfills the role of Jeremy’s aforementioned best friend. Michael in the Bathroom, the ultimate Broadway underdog song, should be relatable to anybody who has ever felt even a moment of social anxiety or abandonment in their lives—the song is so beloved that when I attended, only seconds after the intro music began to play, the audience began to scream with excitement. This was before the singing had even begun. As Salazar signed autographs following the show, nearly one 100 theatergoers could be heard belting out the entire song from beginning to end, much to his amazement.

Lead actor Will Roland, previously seen in the Broadway smash hit Dear Evan Hansen, delivered a fantastic performance, alongside the rest of the 10-person cast, who all provide highly energetic and nuanced performances of the traditional high school trope characters.

When Be More Chill opened on Broadway, The Wall Street Journal called it “one of the strongest new musicals of the past decade.” True to this review, Be More Chill is chock-full of both humor and heartfelt moments, featuring other earworm songs penned by Tony-nominated composer Joe Iconis, including “I Love Play Rehearsal”, “Two-Player Game”, and “More Than Survive.” The Original Broadway Cast Recording is available digitally on all streaming platforms.

Be More Chill closes its Broadway run at the Lyceum Theater on August 11, 2019, so hurry up and catch it while you still can!

For more information about the show log on to www.BeMoreChillMusical.com.