THE PRINCIPALITY OF MONACO: When we decided to spend a few days in Nice, friends told us to take the train one night and experience dazzling Monte Carlo in Monaco.

The principality of Monaco (http://www.visitmonaco.com) has a colorful and fascinating history filled with barbarians, kings and even a movie star. It is a story of castles, epic battles and untold riches. In 1997, Monaco celebrated the 700 year reign of the Grimaldi dynasty. It all began on January 8, 1297 when the Guelf François Grimaldi dressed as a Franciscan monk, seized the fortress protecting the famous rock of Monaco and the port of Hercules. Surmounting the trials and tribulations of history and throughout the dark periods of foreign domination, the Principality has managed to affirm its identity and preserve its independence throughout the centuries due to the wise guidance of its Princes.

The Grimaldi dynasty has bequeathed Lords and then Princes to the Principality, illustrious in their many domains, who wrote the most enticing pages in the history of Monaco. To cite but a few: Rainier I, General Admiral of France; Honore II, the first Prince of Monaco at the origins of the most important treaties with France; Louis I, Ambassador to the Holy See under Louis XIV; Antoine I, grand patron of the arts; Charles III, founder of Monte-Carlo; Albert I, renowned as the father of oceanography; Louis II, the soldier Prince; and Rainier III, the builder Prince.
Since 2005, H.S.H. Prince Albert II – already known as the green Prince for his interest in the environment – has been leading the Principality into the 21st century with the support of His sisters H.R.H. The Princess of Hanover and H.S.H. Princess Stephanie. In 2011 Prince Albert married. Charlene Wittstock.

Monaco enjoys a privileged location at the heart of Mediterranean Europe. The Principality is nestled between the Alps and the Mediterranean Sea, bounded by the French Riviera to the west and the Italian Riviera to the east. This is the second smallest country in the world, after Vatican City -three miles long by one-half miles wide (about the size of New York’s Central Park). While Monaco is the name of the country, Monte-Carlo is a district within Monaco.

Monaco is a constitutional monarchy ruled by Prince Albert II. One commune – Monaco – is divided into four areas: Monaco-Ville, the old fortified city on the Rock which includes the Prince’s Palace, Cathedral and Oceanographic Museum; the Condamine, or port quarter; Monte-Carlo, the business and recreation district; and Fontvieille, a man-made waterfront area for recreation and light industry.

Any person of foreign nationality who wishes to enter Monégasque territory and stay there for a period not exceeding three months must have the document (passport, travel or identity document) required for entry into French territory.

Monaco’s climate is ideal throughout the year. It enjoys mild winters, with 48 degrees minimum, and pleasantly warm summers with July and August temperatures hovering around 78 degrees. On average, the Principality enjoys over 300 days of sunshine a year.

French is the Principality`s first language, but some natives speak the ancient Monegsque. English and Italian are also widely spoken.

The Automobile Club of Monaco organizes a Grand Prix race each year. There are more than 3,000 seats available for sale on the circuit.

The size of Monaco allows speedy and easy commutes between the various districts of the Principality. Walking in the Principality is facilitated by public lifts and escalators that operate 24 hours a day, every day, to help overcome different altitude levels. Public transportation includes a bus shuttle service that includes five different routes. Departures are every 10 minutes from 7 am to 9 pm.

DINING OUT: The highlight of our evening in Monte Carlo was a remarkable dinner at the Salle Empire (http://www.montecarlosbm.com/restaurants-in-monaco/gourmet/salle-empire) at the gorgeous Hôtel de Paris (http://www.hoteldeparismontecarlo.com). We took the train from Nice to Monte Carlo and enjoyed a pleasant 10 minute walk through town to this most breathtaking facility where we were seated on a gorgeous terrace overlooking the entrance to the grand casino. This was “people watching” at its best. A musical trio serenaded us with soft songs and a group of servers provided us with sensational service, starting things off with champagne, soft lemon rolls and their signature potato chips. 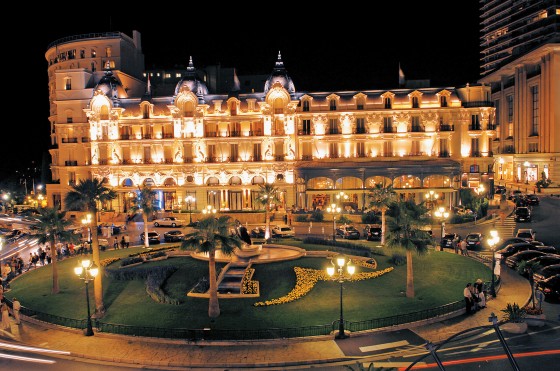 It is in the Salle Empire that haute gastronomy is served during private dinners catering for up to 350 guests, and concerts and shows are organized for invited audiences. Spectacular celebrations also take place in this setting, unique in Europe. It is part of the Alain Ducasse enterprise. We had already tasted his culinary excellence earlier on in the trip at Le Jules Verne Restaurant at the Eiffel Tower. 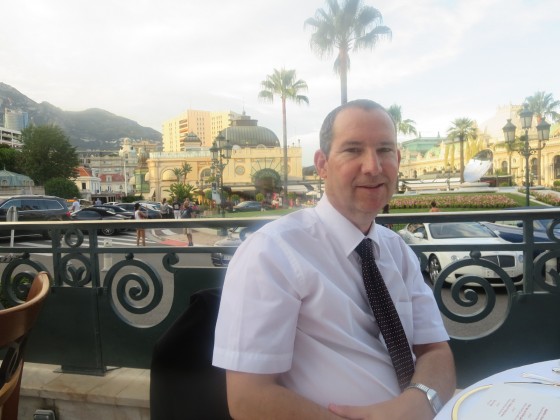 Home to chic galas, refined dinners and the Principality’s most sophisticated soirées, the Salle Empire – a classified historical monument — underwent careful and meticulous restoration in 2004. Eight hundred thousand gold leaves (the equivalent of a gold bar) for its ceiling, five French windows opening out to the terrace overlooking the Place du Casino (a distinctive feature which astonishes guests), swathes of silk and precious trimmings… nothing has been forgotten to glorify its style and its beauty. 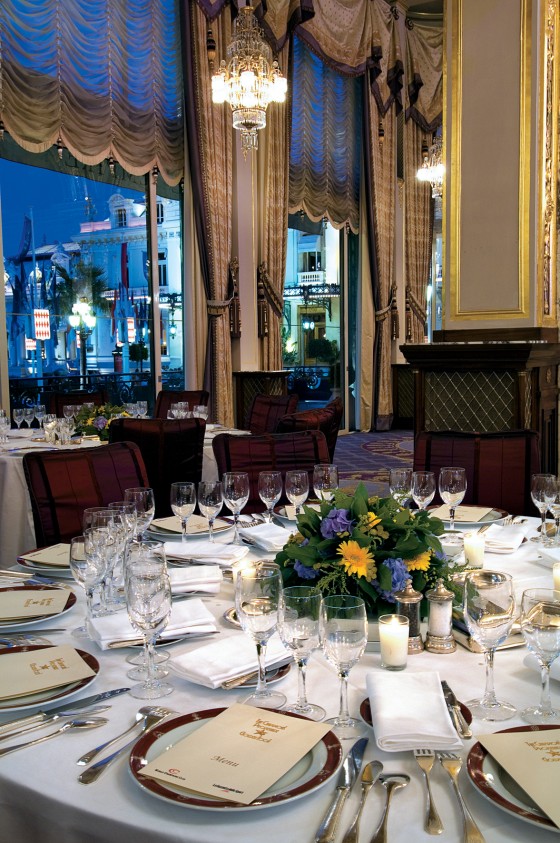 We experienced an extraordinary nine course meal which lasted nearly two and a half hours. Every item on the menu was explained in great detail and if something did not meet our dietary requirements a substitute was easily arranged. First was an interesting and nutritious drink, a concentrated healthy extract of bio vegetables. This was followed by raw and cooked vegetables from the hotel’s own garden, with tangy juice. We then enjoyed some amazing eggplant ravioli with fresh goat’s cheese and thyme lemon. Next was a cook pot of Brittany lobster, with coral juice. The main course was a roasted lack of lamb from prealps rubbed with summer savory and summer vegetable. It was beautifully prepared. 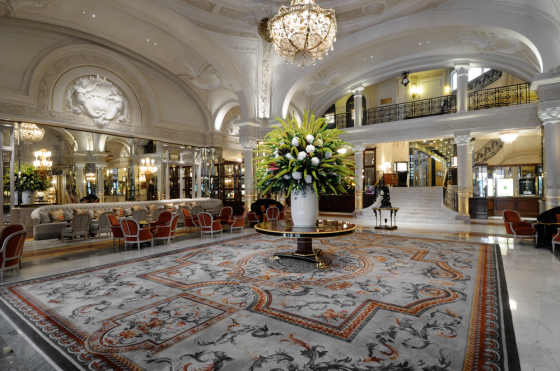 There were no less than three separate desserts: home-made delicacies and chocolates from the Hôtel de Paris; red fruit, strawberry juice and vanilla ice cream; and a traditional chocolate soufflé. The servers made a hole in the middle and poured hot chocolate sauce inside. We each got a side plate of whipped cream. This was so light and beyond delicious. The final serving was a moka coffee.

Widely regarded as one of Europe’s finest grand hotels, the Visitor’s Book reads like a copy of Who’s Who? Originally built with 100 rooms, the property was designed by the architect Dutrou on a model of the Grand Hôtel on the Boulevard des Capucines in Paris. In the summer of 1878, the Monte-Carlo Opera and the new gaming rooms designed by Charles Garnier were built. The Hôtel de Paris immediately acquired an international reputation, hosting numerous society events including balls and charity galas. A succession of high profile guests, including artists and financiers such as Rockfeller, Rothschild, Vanderbilt and Gordon Bennett, would base themselves at the hotel. At that time the amount of food eaten daily was astronomic. The 127 cooks of the hotel were preparing each day 1, 534 pounds of beef, over 200 chickens, 150 game animals, 14 lambs, 150 dozen of oyster and over 1,400 bottle of wines.

At the beginning of the new century , the Russian dukes used to stay at the Hôtel de Paris renting wall floors of the hotel and organized extravagant dinners. The “Grand Duc Dimitri” invited one night a few friends of his. On the menu: caviar, salmon pojarsky and 60 magnum of champagne most of them ending against the marble column of the dining room after an enthusiastic toast. The First World War dampened the sparkle of life in Monaco but when peace returned, the Hôtel de Paris once again became not only the meeting-place of the international elite, but, also, the headquarters of Diaghilev, Lifar and Kochno who created the great moments of the Ballets Russes de Monte-Carlo. During this time, lavish dinners hosted by the King of Sweden, Gustav V, at the Hôtel de Paris were the talk of Europe’s high society.

The Second World War saw the Hôtel de Paris become a shelter for political refugees. At the end of the hostilities, the victory of the Allies once again allowed the Hôtel de Paris to welcome its international clientele including the Duke and Duchess of Windsor, Winston Churchill and Errol Flynn whose wedding in 1952 attracted the Hollywood glitterati. The Hôtel de Paris has hosted many other historical events such as the 20th wedding anniversary of His Serene Highness Prince Rainier and Princess Grace of Monaco in 1976 and the 100th birthday of General Nicolaieff, the hotel’s oldest guest. In May 1974, the 25th anniversary of the accession of His Serene Highness Prince Rainier was honoured at a lavish dinner which was also the first official function attended by the young Prince Albert, Heir to the Throne of Monaco.

On the Place du Casino, opposite the entrance to the Hôtel de Paris, the car valets appear to perform a ballet as they park the prestigious automobiles. The tone is set. Up a few steps, a few strides, and visitors arrive in the great lobby with its majestic ceilings that never fail to stir emotions. The equestrian statue of Louis XIV has a very shiny knee because of an old tradition – gamblers believe that rubbing its knee will bring them good luck. To the right, the entrance to the celebrated restaurant “Le Louis XV-Alain Ducasse,” on the left the famous Bar Américain where the Monaco elite gather, a little further on are the entrances to the Salle Empire and other salons, the luxury boutiques are at the end, the reception desk and concierge service are opposite. First contact, first smiles, attentiveness and immediate efficiency, the extremely courteous welcome from the director who makes a point of greeting all guests, in particular those on their first visit to the Hôtel de Paris. The magic works, the Hôtel de Paris is like a great symphony orchestra playing only for you.

October 6, 2014 will be one of the outstanding dates in the 150-year history of the l’Hôtel de Paris with the launch of a vast program of renovation and restructuring that is scheduled to last for four years. The hotel will continue to operate throughout this period on a reduced scale. Nevertheless, in order to enable guests to be welcomed in the best possible conditions, a short two-month phase of preparatory work will be necessary, leading to a total closure from October 6 to mid-December. The hotel will reopen for the Christmas period until January 18 2015, when the first main phase of work will begin. The complete reopening of is scheduled for September 2018. An exhibition presenting images of the renovation program is set in the “Sporting d’Hiver. During all of this time the Salle Empire will serve as the main restaurant.