I have been to Vancouver many times. On my most recent visit I was actually based in the suburb of Richmond just by the airport, the site of an animal welfare conference I registered for.

Richmond (http://www.tourismrichmond.com) is actually the fourth largest city in BC, just 25 minutes south of downtown Vancouver and 25 minutes north of the United States border – a city of stunning mountain vistas, beautiful waterfront sunsets and vibrant urban living. It is also where they shoot my favorite television series, once Upon a Time – more specifically the seaside village of Steveston.

I was fortunate that the National Animal Welfare Conference was being held at the amazing River Rock Casino Resort (www.riverrock.com). The casino itself has 90,000 square feet of game floor, 115 table games, 1,100 slot machines, a dedicated poker room and high limit rooms. 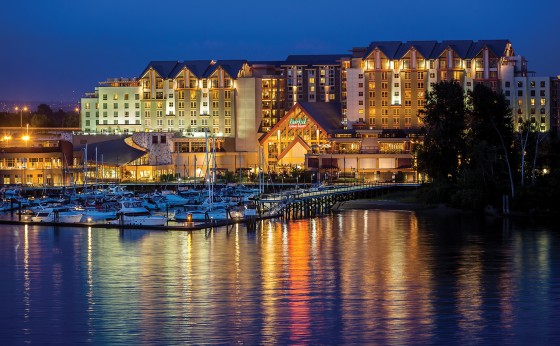 The resort has a swimming pool with big Jacuzzi and 70 foot waterslide, a spa with six private treatment rooms, a work-out gym and weight room, a very popular show theatre presenting some of the top modern artists in music, comedy, theatre and more. There are seven bars, restaurants and lounges spread throughout our property as well as live music with no cover charge four nights a week at Lulu’s, a beautiful marina and boardwalk overlooking the Fraser River and a heated waterfront patio. There is a 24-hour food court, as well as Java Jack’s, a convenient stop for quality artisan coffee, smoothies, soft drinks, pastries, sandwiches and more.

Back to the casino for a moment. Some slots are games of pure chance, such as penny and quarter slots like Wheel of Fortune, while others will test your skill, such as video poker. You can choose to play a progressive bank like Casino Cash, or try your luck to win a brand new car at Race to Win. 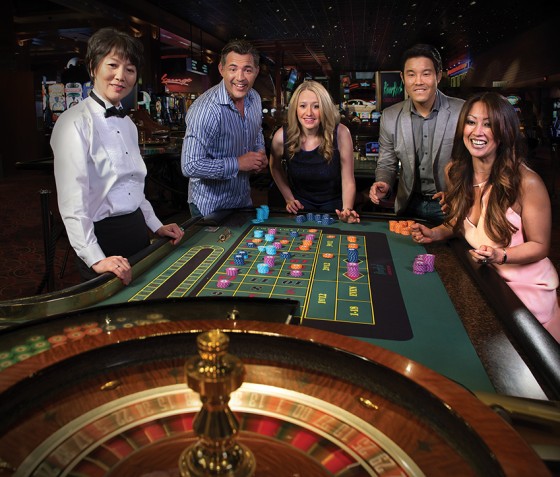 There certainly have been some good Montreal connections at the resort. The Lara Fabian Greatest Hits Tour just appeared there while April Wine was also on the list.

River Rock is centrally located between two major shopping districts: the diverse, world-class shopping centres and niche neighbourhoods in Vancouver, and the bustling and uniquely Asian-Canadian Richmond area shopping attractions. You can reach downtown in no time at all by taking the Skytrain, which also brings you directly to the airport. 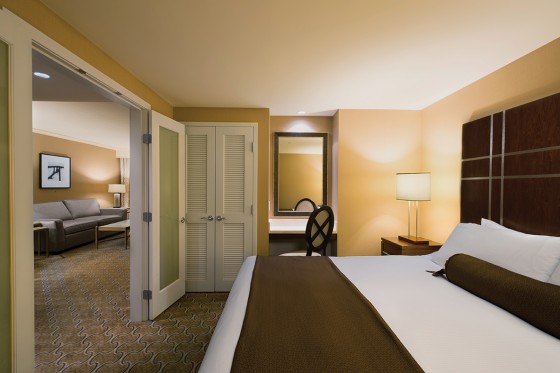 As for the rooms, we stayed in a lovely 525 square foot one bedroom suite. This featured a luxury Euro-top cashmere King bed, with 300 thread count sheets and down/feather (60/40) duvet. There is a sofa bed with seven inch mattress in living room , a 42 inch TV in the living rooms and a 32 inch model in the bedroom, am iPod dock and speaker with alarm clock, quality bathroom amenities, a mini fridge, 24 hour room service and upon request a crib, a humidifier and microwave. It was very spacious and comfortable.

HANDICAPPED ACCESSIBLE: Several accessible parking stalls are available on each level of the parkade near the elevators. The sidewalk leading to the hotel entrance is accessible, with curb cuts to parking surfaces. The main entrance has three sets of double swinging doors (one set is powered. There are two elevators from the lobby to guest room floor, both accessible and with control panels featuring tactile and Braille). As for the guest rooms, five are fully accessible, including wheel-in showers. Five other rooms are also available featuring light alarms, for visitors with impaired hearing.

WHERE TO DINE: While there are certainly some fabulous restaurants in Richmond, we could not resist the temptation of once again experiencing our favorite dining establishment in the heart of Vancouver – Joe Fortes Seafood & Chop House (www.joefortes.ca) on Thurlow Street. We were a party of four on the night we chose to eat there and this was an extraordinary dining experience from the moment we were seated. This is indeed one of the city’s finest restaurants. 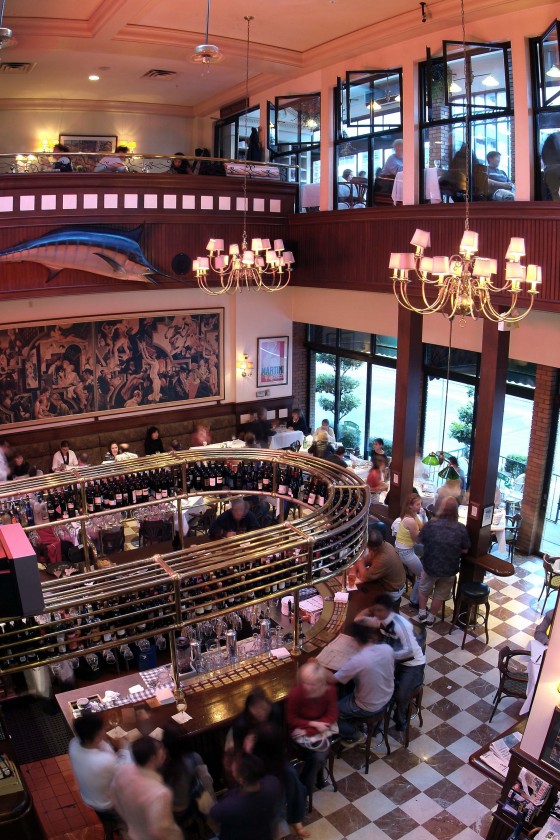 Our waiter Jamie, who has worked at Joe Forte’s for many years, gave us a very good presentation of the specialties.

One of Joe Fortes many unique qualities is the immediate sense of character and personality that guests recognize the moment they step inside. The large, bright room feels instantly powerful yet inviting, and it’s no coincidence that these qualities were also embodied by the legendary figure that the restaurant takes its name from: Seraphim “Joe Forte. In 1885, this burly seaman landed upon Vancouver’s shores and settled into a cabin in English Bay. There, Joe quickly became one of Vancouver’s most popular citizens, serving Vancouverites in a variety of ways first as a bartender and later as Vancouver’s first official lifeguard. Today, he is remembered by a monument near the site of his home, and his popularity lives on inside the welcoming walls of Joe Fortes Seafood & Chop House.

With a commitment to freshness, the Joe Forte’s kitchen receives daily local deliveries, ensuring that you’re guaranteed to find the freshest ingredients on your plate every day.
The restaurant is owned by noted restaurateur David Aisenstat. Born and bred into the restaurant industry, he first learned his chops from his father Hy Aisenstat, founder of the famous Hy’s Steakhouse chain. His ability to recognize and retain talented people, and his passion for art and design, combine for what have been consecutively successful ventures in the industry. He has since continued on to become a legendary restaurateur in his own right, as the owner of The Keg Steakhouse & Bar, Hy’s Steakhouse Cocktail Bar, Gotham Steakhouse, The Shore Club, Ki, and now Joe Fortes.

Scott Garrett is the general manager. For seven years he ran the Walt Disney Resorts in Florida’s food and beverage programs as the restaurant guest services manager, receiving AAA’s coveted Four Diamond Award for service excellence during his tenure.

The main dining room is anchored by a soaring horseshoe oyster bar. This Grand Room boasts large, cozy booths, perfect for hosting a high-powered lunch or dinner meetings, as well as intimate dinner dates. From the mezzanine, diners enjoy a bird’s eye view of the action and live musical entertainment below.

The mahogany-walled wine room offers guests a unique and discreet setting in which to enjoy an intimate lunch, or a private corporate celebration. The more casual side of Joe’s is experienced in the bistro and bar area where locals and out-of-towners alike mingle, soak up the live music and keep their eyes open for visiting celebrities.

For a breath of fresh air, guests can step up to Vancouver’s most desirable roof garden and into an urban oasis featuring a living green wall, cozy outdoor fireplace and bustling horseshoe bar.
Joe Fortes Seafood & Chop House has been specializing in classic, American cuisine since 1985. It is a tribute to Executive Chef Wayne Sych and his dedicated kitchen staff that Joe’s has maintained its unparalleled popularity with both locals and tourists alike for more than 20 years – an astonishing feat in the restaurant business. But even a cursory glance at the menus reveals why Joe’s stays at the top of our customers’ minds and, quite literally, at the tip of their tongues.

The Joe Fortes kitchen prepares each dish with a focus on natural flavours and features the finest ingredients collected from Pacific Northwest farmers, fishermen and food artisans. Serving more than 50 kinds of fresh fish, including their legendary three-tiered Seafood Tower on Ice, premium oysters and succulent chops, their signature dishes have become a favourite of locals, celebrities and tourists alike.

We decided to share the magnificent Seafood Tower, featuring Atlantic lobster, chilled crab, local oysters, clams, mussels, scallop ceviche, smoked local albacore tuna and poached jumbo prawns. Not too many restaurants anywhere I have travelled in the world can make something as appetizing as this. It is $59.95 a tier. We also started off with a small order of scallops – cooked to absolute perfection.

For drinks, members of our party had some prosecco, bitter sweet bliss, sparkling pear and Joe’s cranberry cocktail.

One member of our party vividly remembered the mouth-watering miso marinated sable fish from our visit two years earlier so there was no question what was on her list to order. It came with baby bok choy, mushrooms, ginger scallion butter and jasmine rice. She was not disappointed. The appetizer version of the scallops prompted another to order the Jumbo scallops as her main course – a wise choice. We rounded out our selections with the nine ounce filet mignon center cut filet, with café de Paris butter, scallop potatoes and market vegetables and a sensational bone-in rib steak (14 ounces) for myself with bacon, horse radish, mashed potatoes and market vegetables. To say this was the best steak I have had – well since I last dined at Joe Forte’s – would be accurate.

SPECIAL NEEDS: Upon arrival at the Vancouver International Airport (YVR), located in Richmond, visitors with mobility or agility challenges will appreciate innovative features such as tactile guidance maps of the terminal building, information kiosks equipped with closed-captioned decoders, and ticket counters with amplified hand-sets. YVR is connected to Richmond city centre by a fully-accessible transit system that includes the new Canada Line rapid transit system. From the city centre, getting around Richmond is easy because of the city’s flat, mostly sea-level topography and its many wheelchair-accessible walking trails.

More than 110 Richmond hotels, restaurants, retailers, attractions, and other tourism businesses have made it easy for visitors to identify their level of accessibility by displaying icons on doors, windows, websites, and marketing materials. The level of mobility, hearing and visual accessibility was assessed by 2010 Legacies Now and nearly half of Richmond’s participating businesses rated four or higher out of five. Twenty-four of Richmond’s brand-name hotels now offer wheelchair accessible rooms, and the city’s five modern shopping centres – Richmond Centre, Lansdown Centre, Aberdeen Centre, Yaohan Centre, and Parker Place – are all fully accessible options for convenient one-stop shopping.

The city also encourages full participation of citizens with disabilities. Richmond is the long-time home of Canada’s Man in Motion Rick Hansen, who has won six medals as a Paralympian since being paralysed from the waist down in a car crash at the age of 15. The Rick Hansen Foundation, which operates out of the BCIT Aerospace Campus in Richmond, helped to fund three newly opened playgrounds in Richmond that are specially designed to meet the needs of children with disabilities. These fully-inclusive play spaces along the Middle Arm Waterfront Greenway enable the children to play side-by-side with their friends and families.

Adjacent to the Middle Arm Trail is the Richmond Olympic Oval, which exceeds national standards for accessibility. It features standard ramps, wheel chair accessible washrooms, automatically opening doors, and oversized main elevators that can comfortably transport multiple athletes in wheelchairs. There’s also a wheelchair-accessible indoor rowing and paddling centre. The Richmond Olympic Oval plays a key role in its legacy phase as a multi-sport venue for sport hosting for people with accessibility needs.