The West Island Montreal communities of Vaudreuil -Soulanges continue to gain notice as cost efficient and quality place to live. Located on Montreal’s West Island, extending to the Ontario border, the Municipalité régionale de comté (MRC) de Vaudreuil-Soulanges has a population of nearly 140,000 people throughout its 23 municipalities.

During frequent trips to and from Ontario over the years, I have always noticed the landmark Chateau Vaudreuil Hotel (www.chateau-vaudreuil.com). The increase in development here has been obvious, both commercial and residential. There are plenty of restaurants to choose from, shopping, car dealerships and the largest family entertainment centre in Canada called Woohoo (www.woohoofun.com). The AMT commuter train has a stop here. A new $25 million sports complex has opened and there is talk of a hospital being constructed by 2018, a Costco and possibly a movie theatre complex.

The Vaudreuil-Dorion Regional Museum, located at 431 St. Charles, features a collection of 7,500 objects representative of the daily life of craftsmen and artists from the 17th to the 20th-century. Among one of the first regional museums opened in the early 1950s, it stages over 50 events annually, including exhibitions, concerts and workshops.

The city of Vaudreuil-Dorion recently broke ground on phase two of a project to expand construction on St. Charles Avenue. Mayor Guy Pilon says the project involves building two new overpasses to replace the current deteriorating. They’ll also be adding two more lanes to the access ramp that leads to the Eastbound 40. Construction is expected to be completed in September 2015, at which point a bike path will be built.
The mayor says that 55 percent of the people who work – the work force of MRC Vaudreuil-Soulanges – go to Montreal every morning
I recently chose to spend a little extended time there to explore the area more thoroughly.

WHERE TO STAY: The five star Château Vaudreuil Hotel (www.chateauvaudreuil.ca) at 21700 Route Transcanadienne is extraordinary. It is not only a wonderful choice for tourists, but Montrealers should consider this place for an easy weekend getaway. 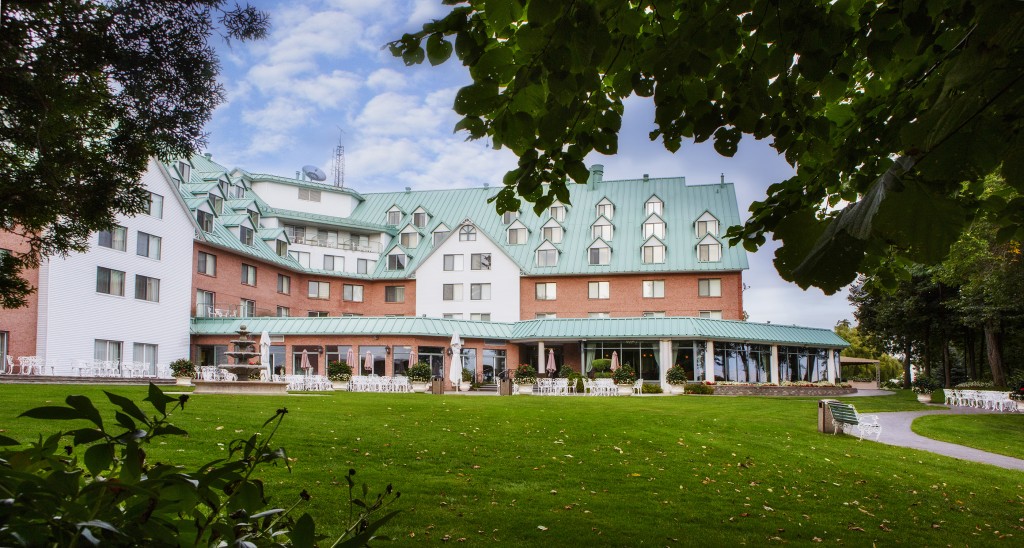 Benito Migliorati is the owner. He is presently marking the 25th anniversary since this palace of a facility first opened. This is very much a family affair. His charming wife Carole serves as vice-president while their two daughters, Melanie and Sonia, work at the hotel as well. Benito purchased the land on the scenic shores of the Lac des Deux Montagnes in 1986 and began building the Château Vaudreuil. In March 1989, the hotel opened its doors for business. It boasts the Pavillon sure le Lac (a magnificent standalone banquet and meeting facility), Villa d’être Restaurant and 116 suites on 25 acres of gardens. A large terrace and covered tents allow activities to expend outdoors, weather permitting.

Their executive suites offer a view of the calming waters of the Lac des Due Montages, 800 square feet of living space, a fireplace and Italian marble bathrooms equipped with Jacuzzi and bathrobes. The main bedroom has a double bed with a bench at the end, a comfortable sitting chair with a footrest, another two chairs, a work desk, a large flat screen TV and a clock radio with stereo sound. There is separate living room side, divided by French doors. Here you will also find a work desk, a sitting chair with footrest and a large LCD TV. You also have a comfortable table for four to eat at, a sofa-bed, a convenient in-room safety deposit box, a mini-bar and coffee machine. The room has extensive cupboard and storage space. A bit more on the bathrooms. These deserve the “Wow” factor. Besides being very large, there are two separate sinks, superb counter space, and a shower, the Jacuzzi, a bidet, a small stool to sit on, a telephone and even a television with a remote.

The hotel offers spa service, a fitness room, a beautiful indoor pool and whirlpool, an in-season tennis court and fantastic banquet facilities for weddings and corporate functions. This is indeed a picturesque locale for a couple to say their vows and the hotel can accommodate groups from 20 to 500 guests. Some ceremonies and receptions occur lakeside. 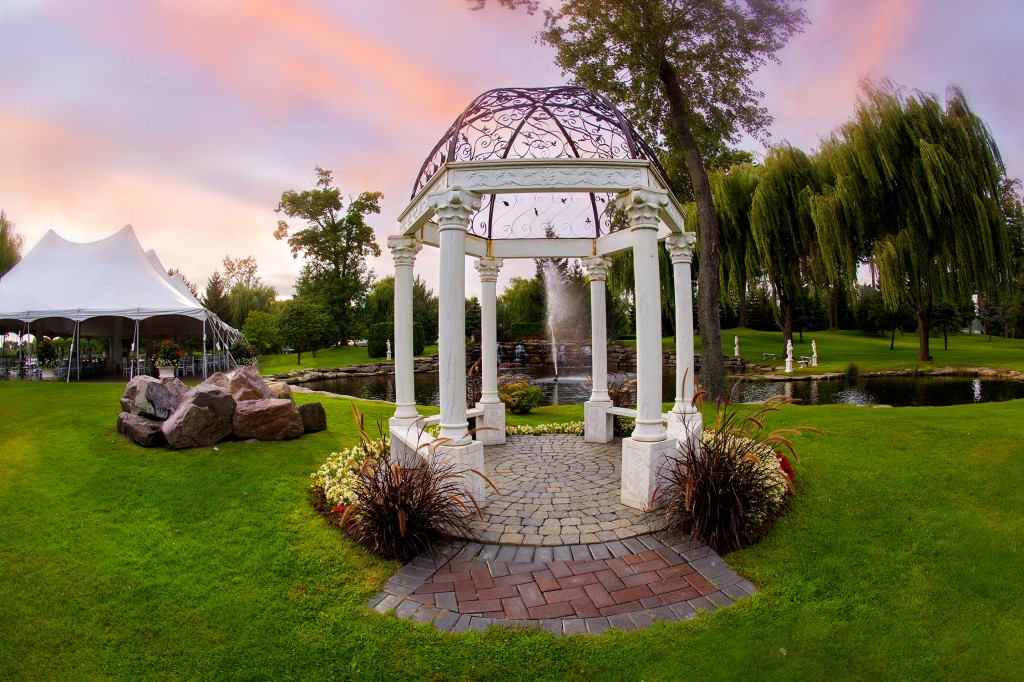 Over the last few years, the Chateau Vaudreuil has become a very popular for Jewish weddings. It has a kosher kitchen, partnerships with two prominent kosher caterers (Tradition/Romano Giorgi and Black Tie/Ernie) and hosts other Jewish functions and business meetings. The Villa d’Este Restaurant even goes the extra mile. Guests requiring kosher meals need only provide 24 hours notice. Breakfast will be brought to your room, with lunch and dinner served in the dining room. This option has greatly increased the number of Jewish guests choosing the hotel, especially those coming by car from Ontario. For more information call (800) 363-7896.

JEWISH HISTORY: People might be surprised to learn about the area’s fascinating Jewish history.

Historian Elaine Steinberg has done extensive research on this subject She recently shared her findings with the Jewish Genealogical Society of Montreal.

Forty years ago Steinberg moved her family across the Ile aux Torte Bridge and never looked back. There are 24 municipalities in the MRC. Steinberg says she moved her family off-island to accommodate her lifestyle. “The Hudson area was well known for its horsey activities,” she says. “I was a young mom with a stable of horses, a menagerie of dogs, a passion for gardens and was teaching half days at Jewish People’s and Peretz Schools in Montreal.”

Given that Steinberg was the first Jewish member of certain clubs associated with Hudson, people assumed that the Steinbergs were one of the first Jewish families throughout all of Vaudreuil-Soulanges. That was until two years ago when Jean Luc Brazan, archivist at Centre d’ histoire de la Presqu’ile in Vaudreuil, chanced upon an early nineteenth century notarial will of a Jew living in the region. It was the sign she needed to begin doing some research.

Descendants shared photos and family lore while village storekeepers had stories to tell as well. Stephan the butcher turned out to be the guardian of the oral story, maintaining a tradition of handing down stories from one generation to another. “Villagers showed me photos, opened their homes and told stories of a Jewish pedlar,”

For reasons unknown, Vaudreuil -Soulanges Jewish history was left unattended, says Steinberg. “When I returned to reclaim it, our history was in a strange state,” she noted. “Sometimes other cultures had claimed it, or it was edited out; or it became a myth by virtue of unresolved facts.”

Despite living in various villages on different dates, the pioneer families shared certain tendencies. They affiliated with a synagogue, stimulated the village economy, were figuratively embraced by their rural community and educated their children to the benefit of Montreal at large and the Jewish community therein.

Steinberg still lives in Vaudreuil West, on the doorstep of Hudson where her children grew up “Although Jewish homes are dotted throughout the region, I think the St. Lazare municipality is the new Jewish frontier,” she says. “It has the highest density and a Chabad rabbi since 2010. Rabbi Nechum Labkowski. It is not far from Dollard des Ormeaux, about 20 minutes, where a lot of Jews live.”
In fact, there are some 200 Jewish families who affiliate with the St. Lazare Chabad

“Strong communities grow on the foundation of stories, of having a sense we stand on the shoulders of ancestors,” Steinberg says. “Heritage gives us pride of place, a right to be and the right to return as we say in Israel. The ‘past’ and ‘future’ make good partners. The younger generation need to hear this. Recently a youngster from the Jewish community indicated to me that she stored greater value in the future than the past.

A sophisticated contemporary complex designed by architect Karl Fischer, Les Perles de la Gare includes three, six storey buildings all interconnected underground in one large indoor parking garage. The first phase of the project, a 58 unit mix of one, two and three bedroom units with private balconies, is complete and fully occupied. Developpement Diamant has broken ground on the second phase while work on the third will come soon after. The latter two will have 50 units. A special amenity building is open now and includes a magnificently large indoor pool, a modern gym, a changing room, a party/play room. The roof top will be fully landscaped as an outdoor garden.

The units range from 717 to 1609 square feet, not including the balconies. Each building has two elevators. Prices range between $181,900 and $399,000, including taxes, indoor parking and lockers.

Project manager Ariel Yudelevich says the response from those already residing in the project and others stopping by the sales office has been exceptionally positive. “You really could not ask for a much better location,” he reasons. “We are 200 metres from the AMT commuter train station, so for anyone who works in Montreal it could not be more convenient. Thus far we have seen many seniors who wanted to downsize from a home to newly married couples and singles from the West Island and the city who cannot afford the price of a condo where they live now.”
The complex is also right next to the Trans Canada Highway, a new $25 million sports complex, and ample shopping options. The main CLSC complex of Vaudreuil-Dorion, a mere 100 metres walking distance from the project, is under construction and expected to open in October 2014.
The project encompasses 50,000 square feet of court yard space, including pave-uni walkways, grass, trees, plants and a gazebo. It is all adjacent to the city bike path.

Partnering with Yudelevich, a civil engineer, are experienced property developers Joe Levine and Amos Sochaczevski. They have already worked together on another project close by called Les Perles Sur le Parc, a grouping of eight and 16 plexes built right on Emile Bouchard Street in the new section of Vaudreuil-Dorion. Each of the buildings is immediately across or a few steps away from a local green space outfitted with a new park. A hundred condos in previous phases have all been sold and occupied while in the new phase of 16 plexes on Toe Blake Street, the first building (125-127 Toe Blake) has also been sold and occupied while in the most recent phase at 131-133 Toe Blake, 30 percent is already sold and ready for delivery now. Prices in this project start at $179,900, with taxes and include exterior parking.

It was Sochaczevski who came up with the novel idea of naming many the streets after Montreal Canadiens greats. Besides Blake and Bouchard, there are Sylvio Mantha, Lorne Worsley, Claude Provost, Maurice Richard, Elmer Lach, Aurele Joliat, Howie Morenz, Jacques Plante and Jean Beliveau.