HOCKEY NIGHT IN BROOKLYN: I have always wanted to see a professional hockey game in New York City. That recently became a reality when I took the trip from the Algonquin Hotel near Times Square to the Barclays Center in Brooklyn to watch the hometown Islanders faceoff against the Toronto Maple Leafs. And I did so from the press box. 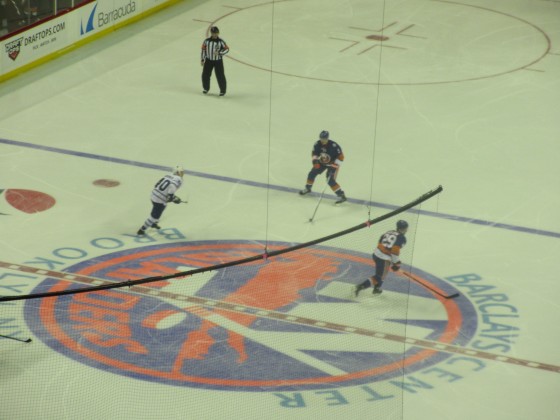 It is less than 30 minutes by subway, taxi or car. The 2015-16 season marked the first in Brooklyn for the Islanders. The team spent its entire 42 history at the Nassau Veterans Memorial Coliseum in Uniondale, NY, aka Long Island. With the arena outdated and no new facility on the horizon, ownership turned towards the Barclays Centre – home of basketball’s Brooklyn Nets. The announcement of the move was actually made three years ago. They have a lease here now until 2040.
The team still has its practice facility in Long Island. Four Stanley Cup banners are already hanging in the Barclays Center. In addition, banners hang for retired players Billy Smith, Mike Bossy, Bob Nystrom, Clark Gillies, Denis Potvin as well as former coach Al Arbour and former general manager Bill Torrey. 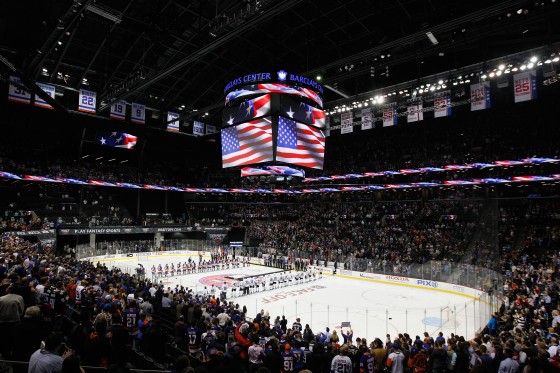 Located in the heart of Brooklyn, at the crossroads of Atlantic and Flatbush Avenues, Barclays Center boasts one of the most intimate seating configurations ever designed for a modern multi-purpose arena. For hockey the capacity is just over 15,000; 17,732 for basketball and up to 18,000 for musical or other performances. It opened on September 28, 2012 with eight consecutive sold out shows by JAY Z. Since that time it has continued to host the world’s most renowned performers, including Barbra Streisand, The Rolling Stones, Paul McCartney, Billy Joel, Beyoncé, Rihanna, Andrea Bocelli, Dave Matthews Band, Bruno Mars and Coldplay, all worthy of top billing on the arena oculus.
I enjoyed the experience immensely and strongly recommend it to anyone visiting New York. As Mike Bossy told, this is indeed a work in progress. Most of the team’s loyal fan base is still in Long Island. They either drive in or take the train. I spoke too many of them as I walked through the arena. While some complained about the commute of at least 45 minutes, they pledged to support the team. Communications manager Jesse Eisenberg told me the adjustment is going well and that sponsorship opportunities in Brooklyn far outweigh those in Long Island, where the team still practices. The players are doing their best to make this work as well. After the game I stood outside the Isles’ dressing room as a slew of players came out to take part in promotional meet and greets.
“I am happy with the move,” forward Matt Martin told me. “We will get new fans, but the old ones are still coming as well.” 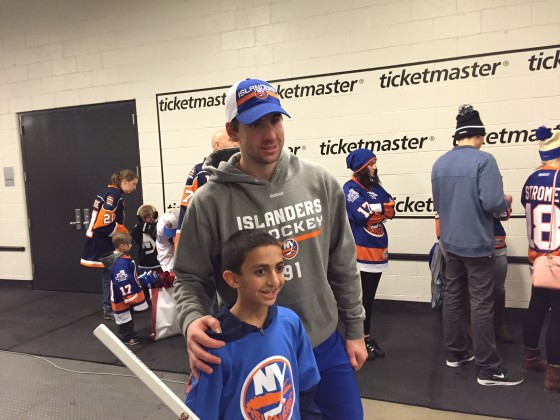 Before the game I met with Montrealer Marc Champagne, one of the team’s goalie consultants. He spends seven to 15 days a month with the Islanders and has a personal background with number one netminder Jaroslav Halak, whom he coached in junior. Halak was out with a lower body injury on this night. J.F. Berube, a former member of the former Montreal Juniors, has also been with the squad and is injured as well.
There was a great atmosphere in the rink and so many fans wearing Islanders jerseys, most with number 91 Tavares on the back (for captain John Tavares). There are all kinds of neat promotions going on – seeking the loudest fan of the game, the best beard, the best dancer, guess the autograph and seat upgrades. At one point during the game a member of the US Army was introduced to the crowd and got a long standing ovation. The team mascot Sparky actually skates around the ice, something the Habs’ Youppi can’t seem to do.
TRANSPORTATION: Eleven subway lines stop near the arena: 2, 3, 4, and 5, B, D, N, Q, and R to Atlantic Avenue-Barclays Center C to Lafayette Avenue G to Fulton Street. Travel Time from Penn (2, 3, C) and Grand Central (4, 5) is 22 minutes.

ACCESSIBILITY: The Access-A-Ride bus stop at Barclays Center is located on Atlantic Avenue, between Ft. Greene Place and 6th Avenue. The stop is situated on the South Side of Atlantic Avenue, adjacent to the arena, and is nearest the Emblem Health Atlantic Avenue Entrance. Barclays Center has been equipped with the most advanced assisted listening devices (ALD). Headsets and receivers are available at no charge at Guest Services. A driver’s license, credit card, or some form of identification will be required as a deposit. Guests who choose to bring their own headset and receiver may access the system on a standard FM broadcast.
Every concession stand and bar is accessible to guests with disabilities. If assistance is required at any of the food service areas, please contact the nearest staff member. Elevators for guests with disabilities are available in the Barclays Center on the Main Concourse, Lower Suite Level, Upper Suite Level and Upper Concourse. Predesigned elevators leading to the Event Level are also available for guests with ADA needs. Guest Services escorts can be provided when guests with disabilities are in need of event level access.
Patrons requiring interpreting services for concerts should contact our Guest Services Department no later than three weeks after concert ticket sales begin. All Barclays Center affiliated lots will have accessible parking spaces available. All public restrooms are accessible to our patrons with disabilities. Animals are not allowed in the Barclays Center, however, an exception is made for patrons with service animals.

Barclays Center provides wheelchair and companion seating with appropriate sight lines on all levels. Be advised that Center personnel reserve the right to take appropriate legal action against individuals who fraudulently