POUGHKEEPSIE: When travelling to New York City, our family always likes to stop over somewhere on the way in order to make the most of our first day in the Big Apple and avoid getting stuck at the border. For our most recent trip we decided to go a little bit further than Saratoga or Albany and targeted the Town of Poughkeepsie (http://dutchesstourism.com), a mere 90 minutes from New York.

Poughkeepsie, nestled in the majestic Hudson Valley, is home to 45,000 residents. The town is rich with culture and steeped in history and the home of such prestigious institutions as Vassar and Marist Colleges as well as Dutchess Community College. Along with these institutes of higher learning, they also have Locust Grove, the former home of Samuel F.B. Morse (as in the founder of Morse code). The 180-acre estate of Samuel F. B. Morse includes an Italianate villa designed by Alexander Jackson Davis containing extensive collections of American and European decorative and fine arts. Three miles of carriage roads wind through landscaped grounds, romantic gardens and a shady grove.

WHERE TO STAY: For the two trips we made as a family to Cape Cod, we stayed at a Sheraton Four Points managed by the Linchris Hotel Corporation. I was most impressed with the operation. My main contact is Robb Moskowitz, Senior Vice-President of Operations. When we decided to stop over in Poughkeepsie, I remembered that Linchris had a property there so we promptly booked a room at their Holiday Inn Express at 2750 South Road. General Manager Rachel Kuhn and her team are in the midst of a $3 million redecoration plan in 2016. Linchris has owned this hotel since 1995 and likes to promote its ideal location. As Kuhn notes, if take the train you can be at Grand Central Station in New York City in 90 minutes. Kuhn has been with Linchris for 15 years, having previously worked for them in Boston and New Hampshire. She has found a home in Poughkeepsie, which is where she wants to stay. 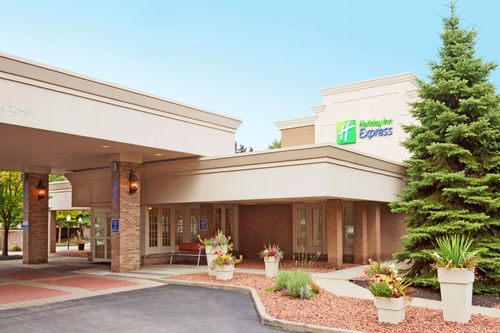 We stayed in a one bedroom suite, which included a sleeper sofa and a Jacuzzi tub. There was a coffee maker, microwave oven, mini refrigerator, plates/glassware and silverware. I really liked the layout. In the main bedroom there was an extremely comfortable lounge chair. The bathroom was gigantic, with two access doors. This is very convenient for the person on the sleeper sofa, who does not have to worry about waking anyone up.

The hotel has 121 rooms and attracts both leisure and corporate travelers. A free hot buffet breakfast, as well as one of the continental variety, is offered daily. The lobby is very welcoming to someone like me who likes to work on his laptop late into the night and not disturb others in the room. I set up shop at one of the comfortable tables, helped myself to some coffee and a freshly baked chocolate chip cookie from the front desk and got to work. It was a most comfortable work environment. 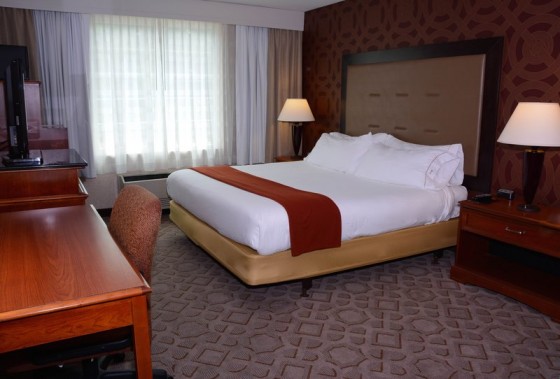 The 24 hour fitness room features everything you’ll need to stay on track with your routine: a treadmill, lifecycle, stair master, recumbent bicycle, free weights, and a two-stage universal gym. There is also a 24 hour business center and a seasonal outdoor pool.

WHAT TO DO: The 22 parks in the area offer recreational activities such as hiking and walking trails in Peach Hill Park. Fine dining is abundant, while art exhibits, festivals, fairs and farmer markets are bountiful.
Poughkeepsie is situated in Dutchess County! Covering 800 square miles, there’s an abundance of natural scenic beauty, outdoor recreation, historic landmarks, restaurants, festivals and more. Activities range from strolls across the Walkway over the Hudson, treks through the Appalachian Trail, and sips along the Dutchess Wine Trail. Tours of the FDR National Historic Site, spins on the Dutchess County Fair Ferris Wheel, and tastes of the Culinary Institute of America restaurants are also highly popular as are cruises down the Hudson River, bushels of pick-your-own apples, and contemporary art from modern masters.

Some places you might want to check out include The Bardavon 1869 Opera House (home of the Hudson Valley Philharmonic), The Mid-Hudson Civic Center (the one-time filming location for WWF Championship Wrestling), The Chance (home of live rock concerts), the Frances Lehman Loeb Art Center at Vassar College, The Barrett Art Center, The Mid-Hudson Children’s Museum, The Cunneen-Hackett Arts Center, Bananas Comedy Club and Joseph Bertolozzi’s Bridge Music. In 2011 Empire Cruise Lines began the operation of the first dinner and tour boat to call Poughkeepsie homeport in nearly two generations. The M/V Mystère is a 60-foot (18 m) double-decked tour boat which departs from Waryas Park at 29 North Water Street.

For shopping and movie theater entertainment, the Poughkeepsie Galleria is located in the town of Poughkeepsie. The mall, which opened in 1987, consists of two floors with 250 shops and restaurants to enjoy. The Regal Cinemas theater has 16 screens. Current anchor stores within the mall include Macy’s, J. C. Penney, Target, Best Buy, H&M, and Sears. I was really impressed with this mall. We were thrilled to find one of our favorite restaurants, Ruby Tuesday, home to a great salad bar and a fun menu. It is truly one of the chains I wish we had in Canada (12 other countries do). Services was fantastic. When I ordered something which I envisioned being cooked differently I told the server Daniel. Even though this was my mistake, she took it back and did not even charge me for the item. A classy move.