A trip to Cape Cod is not complete without exploring Provincetown (www.provincetowntourismoffice.org)—literally the last town on the Cape until you run out of land.

Located 120 miles from Boston along the National Seashore on the outermost tip of Cape Cod and surrounded on three sides by the Atlantic Ocean and Cape Cod Bay, Provincetown is a year-round destination with a fascinating history and extraordinary qualities. From incredible beaches and boundless natural beauty to an eclectic arts and culture scene and world-class dining and shopping, Provincetown offers something for each of the diverse visitors it hosts throughout the year. 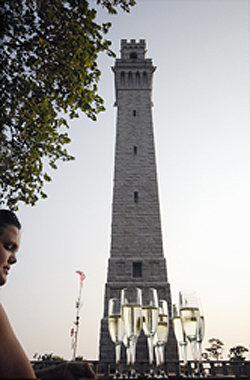 The entire Atlantic Ocean coastline of Cape Cod was preserved as the Cape Cod National Seashore Park (CCNSP) by then President John F. Kennedy in 1961. Provincetown – better known as Ptown – is bounded by the sea on three sides at the tip of Cape Cod and two thirds of the town’s natural resources are managed by the CCNS. From Long Point to the town line, the Cape Cod National Seashore provides miles of federally protected and preserved seashore, ponds, and woods. The CCNS is run by the National Park Service with the dual goal of protecting precious, ecologically fragile land, while allowing the public to enjoy incredible resources. Opportunities abound for swimming, picnicking, beach walking, dune hiking, biking, bird watching and viewing Ptown’s famous sunsets – one of the few places on the East Coast where it’s possible to see the sun setting over the Atlantic Ocean. Dune tours of the National Seashore are offered by Art’s Dune Tours and are a fantastic way to experience the dune landscape. A tour highlight is viewing the legendary dune shacks that were widely used by playwright Eugene O’Neil and poet Harry Kemp. For the hardy and adventuresome, hiking the dunes on foot is possible by entering at the Snail Road entrance. (www.nps.gov/caco/index.htm)

CCNSP is also home to the Old Harbor Life Saving Station, one of three of the original 13 life saving stations on Cape Cod. These oceanfront buildings were equipped to launch a rescue into the surf to pull survivors from sailing ships that had landed on the sand bars 1,000 feet off shore. It is open to visitors and is the only Life Saving Station where life saving history is preserved. A ‘breeches buoy’ rescue is re-enacted by Park Rangers every Thursday evening at 6 p.m. during the summer season. (www.nps.gov/maritime/park/oldhbrls.htm)

During the 19th century the only human dwellers in the Provincetown Dunes were transient campers from Provincetown who fished and hunted there seasonally, the lighthouse keepers and their families, and the hardy men who manned the Life Saving Stations and patrolled the beaches for shipwrecked sailors. The Life Saving service eventually evolved into the Coast Guard, but the CCNSP has moved an authentic 19th century Life Saving Station from Chatham to Race Point Beach to provide a permanent exhibit of the seminal government service which has saved many thousands of lives.

Besides these mariners, there were artists, writers, and playwrights who found creative space in dune shacks in the early 20th century and lived, mostly in isolation from each other, during the warmer months. Today a local non-profit, Peaked Hill Trust, manages the shacks for CCNSP and offers week-long stays at affordable rates in a lottery system.

Art’s Dune Tours (www.artsdunetours.com/index.html) is the only tour company offering four wheel drive access to the dunes. Art Costa began giving “dune buggy” tours in 1946. Today, the tours are given using modern SUVs and arrangements can be made for lobster bakes, and sunset and champagne tours. Tours depart daily from the center of town. For the hardy and adventuresome, hiking the dunes on foot is possible by entering at the Snail Road entrance. The hike in takes approximately 40 minutes, but is rewarded with incredible vistas and the quiet of the giant dunes.

Provincetown is surrounded on three sides by water and is home to some of the best beaches in the country, most of which are accessible by bike trails. At Herring Cove Beach, which is one mile from town, there is beautiful sand, gentle surf for swimming, opportunities for spotting whales in the distance, ample facilities, and great sunsets. Bonfires are allowed with a permit. Race Point Beach, which is two miles from town, is great for families for its Atlantic Ocean surf, facilities, and lifeguard station. Long Point is a local beach favorite. It’s literally at the end of Cape Cod, has a lighthouse, and offers splendid beaches for sunning, swimming, and picnicking. It can be accessed by walking across the West End Breakwater near the Provincetown Inn or by a shuttle boat that runs regularly during the season both from MacMillian Pier and Flyer’s Boatyard in the West End.

The recently renovated National Seashore Bike Trails, particularly the Province Lands Trail, provide unparalleled biking adventures – the bonus is the spectacular views of dunes, forest, ponds and the ocean along the way. Bike trails lead to Herring Cove and Race Point Beaches for swimming and sunning. Biking in and around town is free and easy. Commercial Street, Ptown’s main street, is “one way” for cars, but “two way” for bikes. Rentals shops are located on Commercial Street.

Provincetown is the closest port to the Stellwagen Bank National Marine Sanctuary (SBNMS), a federally protected marine habitat that is home to an amazing variety of marine life, including whales, dolphins, sea turtles, deep sea fish, and sea birds. Its proximity to SBNMS makes Provincetown one the best places in the world to whale watch. Dolphin Fleet Whale Watch, a family run whale watch company since 1975, worked with the Provincetown Center for Coastal Studies (PCCS), an internationally-known marine organization, to develop incredible science-based excursions to SBNMS. Today Dolphin Fleet has its own public education and research program run by Dr. Carole Carlson, a leader in the large marine mammal conservation internationally. Trips are appropriate and enjoyable for people of all ages. (www.whalewatch.com)

Shiver your timbers with the jewels and treasures recovered by world-renowned explorer Barry Clifford. Clifford discovered the pirate ship, the Whydah, which sunk off the coast of Provincetown in 1717. The Whydah is the only verified pirate shipwreck ever discovered. Recommended for “ages 6-98” visitors will learn how the discovery took place, how artifacts were rescued off the ocean floor, and how pirates lived and died. All of the excitement unfolds at the end of Macmillan Pier in the Expedition Whydah Sea Lab and Learning Center. (www.whydah.com)

The Pilgrim Monument, which commemorates the Pilgrim’s First Landing in the New World, is the largest granite structure in the United States, and the adjacent museum houses a collection of Provincetown art, artifacts, history, and culture. After a history lesson on Provincetown, climb to the top of the granite structure for beautiful views of Provincetown and beyond. The monument opens for special, free events during the off-season: Lightings before Thanksgiving (always the Wednesday before Thanksgiving) and during President’s Day/Valentine’s Day weekend, and on April 1st, April Fools Day and PMPM’s Opening Day. (www.pilgrim-monument.org)

No visit to Provincetown is complete without seeing the town’s historic and beautiful library. A replica of the famous schooner, The Rose Dorothea, is exhibited in the library, which offers gorgeous views of the harbor. It also contains a great children’s section, is open on Sundays, and offers free internet access. (www.ptownlib.com)

Dining Out: Bubala’s By The Bay (www.bubalas.com),at 183 Commercial Street, not only has a delightful menu for all three meals of the day. It also offers free parking, a true luxury on what is the best place for people watching in town. Before or after dining, take a walk and check out all of the interesting shops. You can also log on to (www.provincetownpocketbook.com) and order this neat little publication.

Bubala’s began in 1993 upstairs at the Cafe Edwige. Noreen Bahring ran the floor and Rose Kennedy was the executive chef. Bubala’s moved to its current location at the beginning of the West End of Provincetown in 1994. John Yingling is the owner, Liz Roberts runs the bar and floor, Tom Conklin is the general manager, and Gui Yingling is the kitchen manager. They even have a chef named Mike Cohen, who I was unsuccessful in meeting the night we went.

The clam chowder is outstanding. I would also recommend the Cajun calamari as an appetizer while the grilled lamb rack cuts like butter and is very tasty. The pan seared scallops and cod in parchment are also worth considering. A children’s menu for those 12 and under includes penne pasta, pasta alfredo, pasta with tomato sauce and chicken fingers.

There is a nice selection of homemade desserts to choose from, notably the chocolate truffle torte.