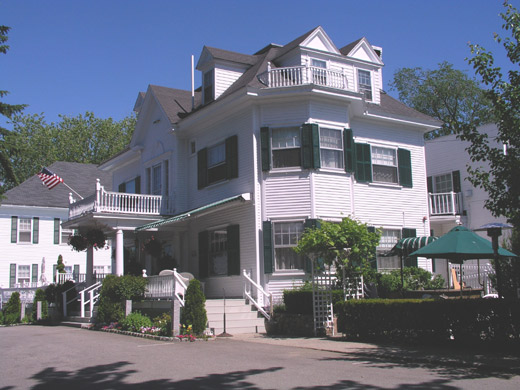 I first heard about Kennenbunkport, Maine, like most others I know, as the place where former US President George Bush Sr. had a summer home known as the Bush Compound First built by Bush’s grandfather, George Herbert Walker, it has been a family home ever since, and has been owned by Bush since shortly after he became vice president in the 1980s. During his presidency, Bush often invited world leaders, from Margaret Thatcher, Mikhail Gorbachev and Yitzhak Rabin, to Kennebunkport. In 2007, his son George W. Bush invited Russia’s Vladimir Putin and France’s Nicolas Sarkozy to meet there.

This is an astoundingly picturesque town in York County, Maine, with a population of less than 4,000. The town center is located along the Kennebunk River, approximately 1 mile (1.6 km) from the mouth of the river on the ocean. Historically a shipbuilding and fishing village, for well over a century the town has been a popular seaside tourist destination. Kennebunkport has a small district of souvenir shops, art galleries, seafood restaurants, and bed and breakfasts. Its reputation as an upscale community comes from the numerous large seaside estates along Ocean Avenue and other coastal thoroughfares. In the summer months, many wealthy people from across the Northeast vacation in Kennebunkport and nearby Goose Rocks Beach. It is regarded as one of the most expensive vacation areas in the Northeast. During the fall, Kennebunkport is a frequent stop for tour buses showing visitors the famous New England fall colors.

Kennebunkport’s Dock Square is the commercial centre of town and is certainly worth an afternoon shopping adventure. You will find unique boutiques offering one-of-a-kind wares, t-shirt shops and some great places to pick up a gift for family and friends. Be sure to visit the many local galleries as Kennebunkport has long been known as one of the region’s greatest artists’ enclaves. 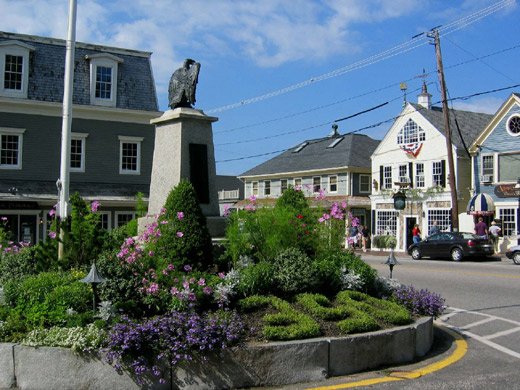 A night of entertainment is easily found in a number of playhouses, where you can enjoy some of the funniest, dramatic or vocally inspiring shows you can imagine. The Maine coast has been a summer haven for Hollywood actors to come and “hit the boards” since the forties, and they still come today to stretch their acting muscles and enjoy the beauty and relaxation of our coast.

Maine has more than 5,000 miles of coast and some of the most beautiful beaches in the entire state can be found here in the Kennebunks. Whether you’re a family looking to set up for that perfectly relaxing day at the beach or a surfer hoping to catch the ultimate wave, the beaches in Kennebunk and Kennebunkport offer some of the best fun in the sun. You need to buy a parking pass and hope there is actually a spot when you get there. Seek out Mother’s Beach, where we enioyed some wonderful days and park your chairs at the very back of the sand because by mid-afternoon the surf comes up pretty high. The ocean water is cold, but my family and I had no trouble wading in and jumping the waves. It was relaxing and a lot of fun.

One activity we had planned, but not succeed in experiencing due to the weather was a 90 minute trip on Kylie’s Chance. The boat tour gives you a chance to see how Maine Lobsters are caught. You also get a nice view of former President Bush’s estate and seals in their natural habitat on Bumpkin Island. Try to call 207 967 5507 ahead of time.

WHERE TO STAY: For the past few years I have been on the email list of The Kennenbunkport Inn, receiving their always interesting newsletter. So, when I decided to make my very first trip to Maine, naturally I contacted them immediately. This is a charming intimate hotel, with 49 guest rooms in the Victorian Mansion, Riverhouse or Wharfside buildings right in Dock Square, the heart of all of the shopping, dining and attractions. From the elegant style of the Federal and Mansion rooms to the charming ambiance of the Riverhouse to the Maine beach cottage style of the Wharfside, there is a room perfect for every taste and need. 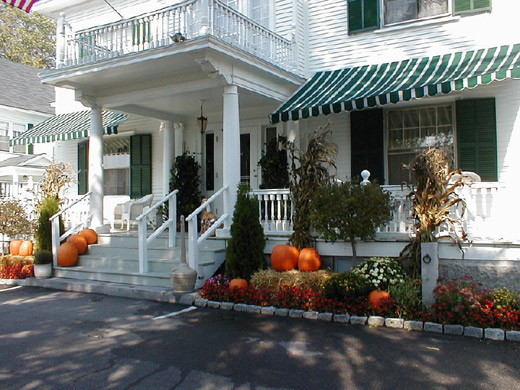 We had a Wharfside family suite., which is large enough to fit at least six people. I cannot remember when I last felt this comfortable away from home. It features standard rental style furnishings, three bedrooms, a large living room with sleeper sofas, kitchen facilities and a private bath. The Wharfside is a short walk across the street from the main building, which contains the One Dock Restaurant, the piano bar, patio dining, an outdoor pool, spa services and a guest library. There is a delicious complimentary deluxe continental breakfast served each morning and private off-street parking.

Perfectly located in Dock Square, the heart of this seaside resort village, you are steps away from the bustling collection of shops, galleries, historic sites, restaurants and the Port Walk Shops that don the Kennebunk Rivers edge.

The Inn is owned by the husband and wife team of Debbie Lennon and Tom Nill. Debbie’s parents have a home nearby. The couple got married here in 2000 and had their rehearsal dinner at the Inn. They immediately fell in love with the property and a few months later they approached the then owners and began negotiations to purchase. Debbie and Tom are hands on owners who have hired a lovely and caring staff. The Inn itself was originally built as an elegant family home in the late 1890’s by Captain Burleigh S. Thompson, a wealthy tea and coffee merchant. Captain Thompson lived here with his wife and daughter until 1926, when he sold the mansion to Lloyd and Murray Hackenburg. It was in that year that the mansion first became The Kennebunkport Inn.

DINING: As we prepared for our trip, the names of two restaurants in Kennenbunkport kept coming up: Bartley’s Dockside Dining, located right by the bridge at 4 Western Avenue and Mabel’s Lobster Claw at 124 Ocean Road.

For over a quarter century, three generations of the Bartley family has been serving great food. During those years, they’ve made countless friends that have entered through the restaurant doors simply to enjoy the flavors of a good meal and left a devoted fan for life.

There are so many photos of President Bush on the wall you’re sure he’s just around the corner chomping on a lobster roll! There is a new photo, personally autographed to the Bartley family, from Bush of his latest skydiving experience in the area.

Vacationing celebrities enjoy the anonymity of dining in a place they call their own and being called a regular This was the favorite watering hole for the White House Staff and the intimate bar offers full liquor choices. Bartley’s has free parking for their guests while dining in air conditioned comfort. Since we were staying at the Kennenbunkport Inn, we had a barely five minute walk.

Bartley’s air conditioned restaurant, situated on the river that flows through town, boast of having the freshest lobster. Indeed they do! Lobsters swim in a salt water tank located inside the restaurant, making your choice for dinner as fresh as you’ll ever have! Brian Bartley jokes that you’ll need a chain saw to cut into the gigantic size of their lobster, and at 3 1/2 pounds…he’s right! The baked stuffed lobster here is superb. This house specialty involves the chef first splitting and cracking open the lobster. After breading is added to the inside it is cooked for 20 minutes in the oven and served so easy to enjoy. The lazy man’s lobster is another favourite. Here all the work has done before you, with the lobster meat taken out of the shell and served on a casserole dish with butter. It is so beautifully prepared, even the kids will enjoy it.

Other choices include the caramelized salmon, haddock ala Dockside and steaks. Most vegetables are an afterthought , but not at Bartley’s. Gail Bartley hand picks the freshest vegetables form the farmer’s markets daily during the summer and fall seasons. For an appetizer try the fresh native crab-meat cocktail or the fried whole clams with tartar sauce.

If you look up Blueberry Pie in the dictionary, Dorothy Bartley’s smiling face would be right next to it! Mrs. B’s Blueberry Pie was a staple on Air Force One. I would strongly recommend you save room for this specialty.

Mabel’s is legendary in Kennenbunkport. In the summer season, with its terrace, about 70 people can be seated at a time. The place is always packed, so be sure to make reservations (207-967-2562) in advance. Owners Robert and Stephanie Fischer bought the place 12 years ago and take a real hands on approach. Their kids work here as well and they take only one day off a week. The night we were there, we were told President Bush dropped by for ice cream a few days earlier. Then Robert brought over a special guest to the table, award winning Jewish composer Marvin Hamlisch. He had just finished his meal and was quite a gentleman.

The menu here is pretty comprehensive, with everything from lobster and a variety of fish selections to chicken, beef and pasta. There is a special children’s menu of chicken, fish, burgers, spaghetti and even hot dogs. The lazy lobster is a favourite. I sampled the sword fish and it was absolutely out of this world. Their homemade clam chowder is superb as are the fried scallops. For dessert, try one of their pies (made fresh daily) or the chocolate cake topped with hot fudge sauce.