Nestled between spectacular Nauset Beach on the Atlantic and tranquil Skaket Beach on Cape Cod Bay, Orleans offers something for everyone. One of the prime draws in Orleans is its Academy of Performing Arts (www.apacape.org), Cape Cod’s finest quality theatre and studio. Located at 120 Main Street in what was once Orleans Town Hall, the Academy Playhouse delivers the best drama, musicals, comedies and original works you can find on the Cape. It is a year-round source of great entertainment for all ages. Established in 1975, this non-profit organization is dedicated to producing high quality performances and nurturing the artistic development of our community. Last summer my family and I attended a performance of Rent. I must tell you that I am still humming the songs to this day.This is not an easy show to put together, with 36 songs in all, but the young cast pulled it off beautifully.

The cozy 162 seat theatre, which captures the essence of live theatrical experience, hosted an enthusiastic crowd the evening my family was in attendance. The cast are all volunteers, hoping for future stage careers. Take Nic Chad for instance. The 19 year old was the “Season’s of Love: soloist. At my hotel, the Four Points Sheraton in Eastham, there was Nic working behind the front desk. He spoke about what a thrill it is to be part of this theatre group. “We rehearsed for two months straight and we the show six days a week,” he said. “It is great experience. We all want careers in this business. I will be pursuing mine by going to school in Los Angeles.”

I would strongly recommend you make a visit to the Playhouse part of your itinerary. It is fully air conditioned, something which was not the case six years ago when I last visited.

The Playhouse is not presently wheelchair accessible. You need to climb stairs to get to your seats. Plans are now in place to mount a rigorous capital campaign to restore the front of the theatre, as well as to provide ADA compliant handicap accessibility by installing an elevator

Dining Out: The top restaurant on our list from the last trip was the Orleans Waterfront Inn (www.orleansinn.com). Right on Route 6A, in a beautiful setting overlooking the water and next to Windmill Park. Just like last time we made this our dinner prior to going to the theatre. Our waitress Kara, an aspiring performer herself, was wonderful in getting us our dinner in enough time for us to get to the show on time.

This is a family-owned establishment. Ed Maas, his wife Laurie and their eight children have all played a role in making this historic property a must stop since purchasing it 14 years ago. The restaurant offers the finest menus, from a varied selection of fresh local seafood, produce and grill specialities. There is a kids menu, offering everything from chicken fingers and burgers to pasta and pizza. Homemade desserts, specifically the chocolate layer cake, are to die for. If you order lobster, this place will crack it up for you. Also, try the clam chowder.

Ed’s two twin daughters and his eldest son now manage the restaurant. Three of his children were adopted and each of them has special needs. Two work at the restaurant, which is fully wheelchair accessible with a ramp at the front.

The Inn itself was built in 1875 and eventually served as a boarding house, a summer vacation hotel and restaurant. While it presently boasts 11 beautiful guest rooms, the place is mainly used for weddings and corporate functions in the elegant downstairs Cove Room. It leads to the waterfront deck and has a seating capacity of 150. Ed Maas told me that there have been many Jewish simchas held at the Inn. Ed’s brother Fred is the chief of police in Sunny Isles, Florida, the home of a large Jewish community.

Dinner on the evening we went was delicious: clam chowder, an appetizer of seafood cakes, a 12 ounce teriyaki ginger crusted sirloin steak, lobster and scallops. The triple layer chocolate cake was perfect to share for three. Ed was busy attending to two of his grandchildren. He has four in all and a fifth on the way.

There are no kosher restaurants in Orleans, but the Inn offers a number of salads and items such as grilled Atlantic salmon, fish and chips and pastas.

Also worth checking out is Hearth and Kettle, a small Cape Cod chain of restaurants which service breakfast items from morning until close. They have an extensive menu with other options as well. We ate at the Orleans location on West Road, located in a large strip mall with a Shaw’s grocery store.

A huge Stop & Shop grocery store is across the street from the Orleans Inn. It is conveniently opened till midnight and has everything and more you wish to stock your fridge with. A CVS Pharmacy is just as few more blocks up the road. 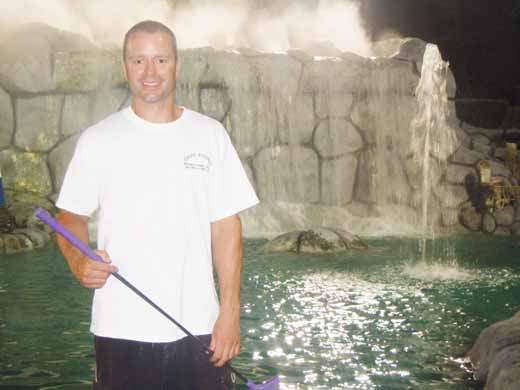 Mini-Golf: The Lower Cape’s largest and best 18 hole mini-golf course is located right at the Orleans Rotary (next to Wendy’s). Cape Escape Adventure Golf (www.capeescapeadventures.com) is operated by the McCarty family and has the backdrop of a beautiful nautical setting, featuring waterfalls, fishing vessels and live koi fish you are encouraged to feed. Michael McCarty has been working at the course for 19 years, since he was 12. It is open from April until October ( 9 a.m. until the last group enters the course at 10:30 p.m.). We really enjoyed the ambience. The course itself was fun. Good music played in the background and everyone was friendly. Each hole is named after a different town in Cape Cod, with Plymouth, Martha’s Vineyard and Nantucket added in for good measure.
While individuals in wheelchairs cannot navigate this course, McCarty says clients with crutches have managed to complete the course. There have also been many visually impaired individuals as customers.

The McCarty clan actually operates this entire block. Across the street is Mike’s Bike Rental, Mandy’s Cape Creamery and the Cape Tradewinds gift and beach shop. Make sure to give this spot a visit the next time you are in this part of the Cape.