South Beach is the section of Miami Beach, Florida that encompasses the southernmost 23 blocks of an island separating the Atlantic Ocean and Biscayne Bay. This area was the first section of Miami Beach to be developed, starting in the 1910s, thanks to the development efforts of Carl G. Fisher, the Lummus Brothers, John S. Collins, and others. The area has gone through numerous man-made and natural changes over the years, including a booming regional economy, increased tourism, and the 1926 hurricane, which destroyed much of the area. 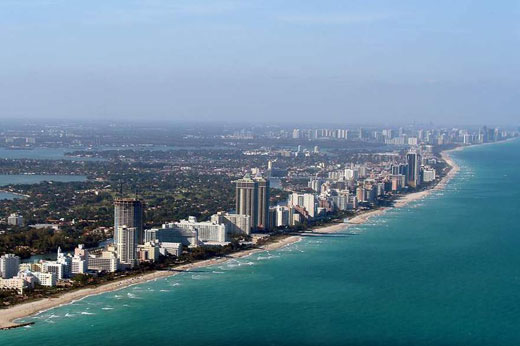 In both daytime and at nightfall, the South Beach section of Miami Beach is a major entertainment destination with hundreds of nightclubs, restaurants, boutiques and hotels. The area is popular with both American and international tourists (mainly from Europe, Latin America, Canada, Israel, the Caribbean and within the United States), with some having permanent or second homes. The large number of European and Brazilian tourists also explains their influence on South Beach’s lax and overall tolerance of topless sunbathing, despite it being a public beach.

Another unique aesthetic attribute of South Beach is the several colourful and unique lifeguard stands, still used today by South Beach’s lifeguards. After Hurricane Andrew, Architect William Lane donated his design services to the city and added new stops on design tours in the form of lifeguard towers. His towers instantly became symbols of the revived City of Miami Beach.

On a nice night, there is nothing better to do than find a good parking lot and spend some time walking the streets of South Beach.

Lincoln Road is an open-air pedestrian mall, considered South Beach’s premiere shopping area. It is home to many restaurants and several night clubs, such as Score and Funktion, as well as many retail outlets. While Lincoln Road was one time rather downtrodden, with its unique boutique shops and restaurants, since the 1960s it has had “an esoteric chic that maintains its trendy appeal.” It is located in between 16th Street and 17th Street and spans the beach in an east-west direction.

Ocean Drive is the easternmost street in South Beach, and stems from south of First to 15th Street, running in a north-south direction. Ocean Drive is responsible for the South Beach aesthetic that most out-of-town visitors expect. It is a popular Spring Break and tourist area, including the famous, yet predominantly local, Pearl and Nikki Beach night spots.

Washington Avenue is one of the best-known streets in South Beach. Running parallel with Ocean and Collins. Washington is notorious for having some of the world’s largest and most popular nightclubs, such as Crobar and Mansion. During “season” (October 15 to May 15) the street is jammed with traffic until early in the morning (as late as 6 am) every night of the week. In the 1990s explosion of South Beach as a nightclub venue, its nightclub moguls included Ingrid Casares, whose investors included the singer Madonna Ciccone.

JEWISH MUSEUM OF FLORIDA: If you’re vacationing in South Florida anytime soon and it begins to rain, here is a great indoor activity. The Jewish Museum of Florida chronicles the little-known nearly 250-year history of Jewish life in Florida as an example of the immigrant acculturation process of all people in Florida – and in America.

The Jewish Museum of Florida opened in April 1995 when a group of visionary Floridians rescued an abandoned art deco historic synagogue on Miami’sSouth Beach from demolition. They restored and transformed the building as a place to house the growing collections and as a bright and sunny showcase for an award-winning historical exhibit, MOSAIC: Jewish Life in Florida. This core exhibit project was begun in the mid-1980s in a statewide grassroots effort to collect and preserve photos, artifacts, documents and oral histories of thousands of Jewish families throughout the state of Florida. The Museum received accreditation in 2002 by the American Association of Museums, an honor granted to only 3% of the nation’s museums.

Florida hosts the nation’s third largest Jewish community – 850,000 people, but is perceived to have a “new” Florida Jewish history starting after World War II. In reality, Jews have been allowed to live in the state only since 1763 when Florida was taken from the Spanish, who permitted only Catholics, and turned over to the British in the Treaty of Paris following the French and Indian War. The first Jews settled in Pensacola that year. The man who brought Florida into statehood and served as its first U.S. senator (and the first Jew to serve in the U.S. Congress) was a Jew, David Levy Yulee.

The Jewish Museum of Florida has been heralded as a cultural jewel of Miami Beach and in 1980 earned a spot on the National Register of Historic Places. The building, with a unique copper dome, was completed in 1936. It was designed by noted Art Deco architect Henry Hohauser as an Orthodox synagogue for Miami Beach’s first Jewish congregation. Rabbi Moses Mescheloff, who served the congregation from 1937 to 1955, designed the marble Torah-reading bimah and 80 colorful stained glass windows, which are still intact. The Museum is located at 301 Washington Avenue. For more information call 305-672-5044 or log on to www.jewishmuseum.com. It is open Tuesdays through Sundays from 10 a.m. to 5 p.m. and closed on Mondays and civil and Jewish holidays .

CHINA GRILL: Prominent American restaurateur Jeffrey Chodorow’s commitment to the idea that serious food and dazzling spectacle are not mutually exclusive has led him produce some of the most original, critically acclaimed and wildly popular dining hotspots across the globe. Today, Chodorow’s China Grill Management and its affiliates operate 26 restaurants in the US, UK and Mexico. His global restaurant group consists of an impressive array of first-class dining spots. CGM and its affiliates own, operate, create concepts, and /or consult in creating some of the most acclaimed and innovative restaurants in Miami, New York, Las Vegas, Los Angeles, London, San Francisco, Chicago and Mexico City. His organization’s phenomenal reputation is a result of his culinary ingenuity and unyielding commitment to excellence. It is this combination of uncompromising vision and gourmet expertise that has enabled China Grill Management and its affiliates to provide the public with restaurants of the highest quality. CGM’s flagship restaurant, Manhattan’s venerable China Grill, opened in 1987. Without sacrificing China Grill New York’s distinctive atmosphere or the quality of its cuisine, a sister property in Miami was opened to rave reviews in 1995.

Instantly anointed the place to “see and be seen,” China Grill has become celebrity central for the international set in South Beach. Oprah Winfrey is crazy about the low fat cuisine and dines there whenever she’s staying at her Fisher Island home. Madonna, a really big fan, got a thrill dining there the same night as Miami Heat coach Pat Riley. Will Smith and Jada Pinkett enjoyed a honeymoon dinner following their New Year’s nuptials. Michael Caine dines there when in town. George Clooney had to be escorted in through the back door due to the many paparazzi trying to get a photo of him. Jack Nicholson likes to enjoy a cigar after a meal befitting a Hollywood legend. Supermodels Cindy Crawford, Nikki Taylor, Naomi Campbell, Daisy Fuentes and Vendela, superstars from Sly to Cher to Prince, Brooke Shields, Eddie Murphy, Jeff Goldblum, Lenny Kravitz, Aerosmith’s Steven Tyler, Julio Iglesias, Enrique Iglesias, Anna Kournikova, director Oliver Stone and actor/director Sean Penn, sport ‘s stars Ken Griffey Jr., Patrick Ewing, Alonzo Mourning, Livan Hernandez, Wayne Gretzky, and Emerson Fittipaldi have all wielded chop sticks here. Senator Bob Kerrey, Magic Johnson, Donald Trump, Placido Domingo and George Stephanopolous fill out the list of the legendary and the distinguished.

My family and I made our first visit to the China Grill South Beach location and I must tell you it was an experience to remember. This was an entire evening out. Our server, Stepha Diamond, has been with the place for three years. She is a walking encyclopedia of the menu. More importantly, she gives excellent suggestions and what to order and share.

Virtually every dish at China Grill is prepared on the grill or in a wok, using sauces strictly for flavor. Portions are generous, and artfully presented on bold, oversized plates, and above all, meant for sharing. We started off with some fabulous crab cake, some salads (crackling calamari and confucius chicken) lamb spareribs and regular calamari) and perhaps the best sushi rolls I have tasted in a long time – the kaleidoscope (salmon, tuna, cream cheese and spicy mango) and crunchy tuna. 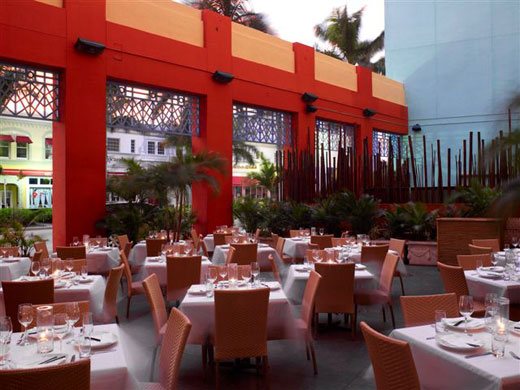 Spectacular entrees, large enough for two to three people, include Shanghai lobster with ginger, curry and crispy spinach, Korean kalbi rib eye with truffled artichoke-potato hash, wild mushroom profusion pasta with sake Madeira cream sauce, duck two ways, sweet soy marinated skirt steak, tempura sashimi with hot mustard-champagne sauce, lobster pancakes with wild mushrooms and red chili and coconut milk. A selection of nine popular side dishes include wasabi mashed potatoes, crispy spinach, and five vegetable fried rice among others. Do not worry about over ordering. The staff will package any of the leftovers up so you can continue to enjoy the China Grill experience. Save some room for dessert. We receommend the cheesecake pot stickers (with the five spice chocolate raspberry, mango and ping sauce), the Great Wall (vanilla, chocolate and caramel ice cream, toasted meringue, fresh berry and whipped cream) and the hazel nut chocolate torte (blackberry and orange cream and anglaise sauce).

In an area known already for it’s architecture and design, China Grill stands out. Spectacular from the outside, breathtaking on the inside, the restaurant captures the pulse and energy of Miami. The landmark glass, onyx and limestone building encompasses three separate dining and drinking areas. A 250-seat main dining room pulsates at the center. Interiors designed by noted architect Jeffrey Beers include passages from Marco Polo’s travel diaries emblazoned in marble mosaics that run the length of the restaurant’s imported Egyptian limestone floors. One of the most striking features of the restaurant is Beers’ signature — almost ethereal custom light fixtures that hang from the restaurant’s soaring ceilings like clouds.

One of Florida’s most highly acclaimed restaurants, China Grill has twice received from the Miami Herald their highest rating, EXCEPTIONAL. The restaurant has been featured as one of the region’s “hot new restaurants” in the March 1996 issue of Esquire and hit the cover of New York Magazine’s February 12, 1996 edition, accompanied by a story that tracked the migration of chic from New York to Miami Beach. The April 6, 1997 issue of The New York Times’ travel section, China Grill was praised for its invigorating, light and inventive food. The October 1997 issue of Travel & Leisure deemed the restaurant’s Shanghai lobster a to-die-for dish. Voted one of Miami’s most popular ( top 40s) restaurants by the ZAGAT Survey. 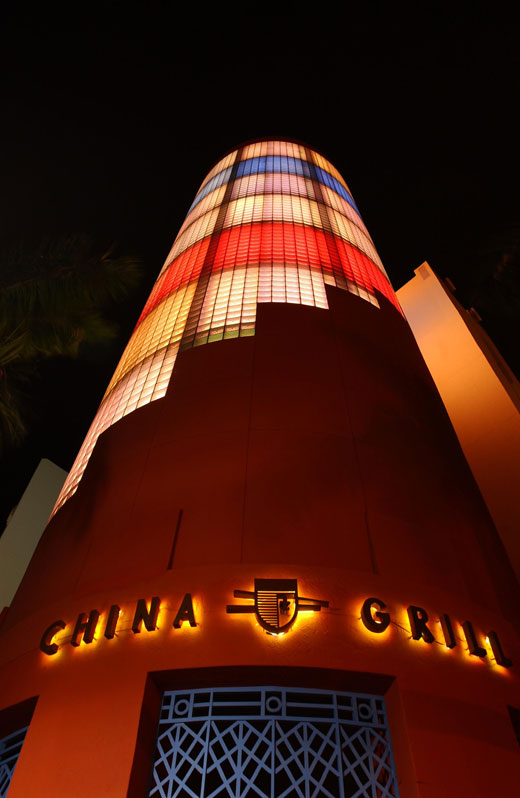 Special Needs: The China Grill offers valet parking. This establishment is handicapped accessible. If any member of your party is in a wheelchair, ask to be seated at the main level. There are special handicapped accessible washrooms for males and females. For those with vision problems keep in mind that the restaurant is very dark, with candles at each table. The servers will be happy to provide you with a small flashlight to help you better navigate the menu.

China Grill is located at 404 Washington Avenue in Miami Beach, with easy access directly off the MacArthur Causeway from 1-95. Dinner Sunday through Thursday from 6:00 p.m. – midnight, Friday/Saturday from 6:00 p.m. – 1:00 a.m. Major credit cards accepted. For reservations, call (305) 534-2211. You can see their entire menu at www.chinagrillmgt.com.

One thought to “Miami: The South Beach China Grill Experience”