Wannado City is a trend-setting children’s entertainment concept designed to inspire kids to live out their dreams in an entertaining and educational manner. It opened last summer at the gigantic Sawgrass Mills in Greater Fort Lauderdale. Upon entering, kids and their parents/grandparents are transported to a 140,000-square-foot realistically designed city – the size of three football fields. Here, they role-play hundreds of professions including firefighter, archaeologist, actor, TV or news reporter, chef, judge, airplane pilot, doctor and many more. Each “kidizen” is initially presented with their first “real” paycheck (paid in Wongas- the official currency of Wannado City ) at which time they quickly learn the value of saving, investing and spending their money. Many rush to open their own bank account, while others cash-in their first cheque and spend it on entertainment, theater tickets and even rides at the Wannado City Fair. When the Wongas run out, the kids employ themselves within Wannado City to earn more. Many try out their medical skills in the hospital and dentist’s office, while others don flight uniforms and practiced flying skills by way of flight simulators located in an authentic DC-9 jet. Aspiring actors head for the Wannado City Theater, movie and television studios while others select careers in beauty and fashion, paleontology and criminal justice. Unlike any other metropolis in America, Wannado City is a complete city created from the point of view of its kidizens. The entertainment park features multiple venues including pint-sized fire and police stations, a hospital, circus, theater, television studio, fashion house, dance club and newspaper-all designed to inspire kids ages four to 11 to play grown-up and live out their dreams. If your kids are 10 or over, you can actually leave them unaccompanied while you shop. And you’ll have no problem reconnecting with your party thanks to the WannaFinder locator bracelet. Kiosks throughout the park allow you to track your group members in real-time. 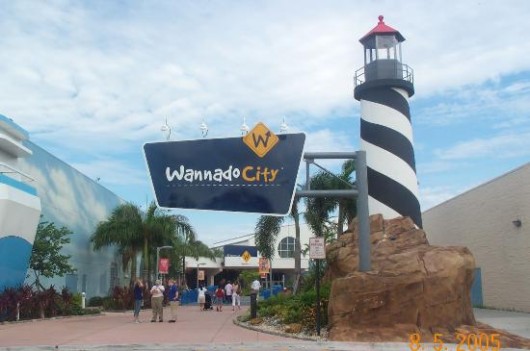 Wannado City has already begun working with schools, educational groups and other organizations to develop age-appropriate curriculum that meets state educational standards. Wannado City is open Monday to Friday (10 a.m. to 5 p.m.) and weekends (10 a.m. to 9 p.m.). Admission is $27.95 for kids, $15.95 for grownups over 14 while children under three are admitted free. Wannado City has been launched by Wannado Entertainment, an entertainment company whose vision is to empower kids through the creation of reality-based, interactive properties that entertain and educate.

For more information on Wannado City go to (http://www.wannadocity.com)